Webinar on “Protection of witnesses and whistleblowers: Strengthening the Frameworks” organised by DSNLU Vishakhapatnam and Confederation of Alumni for National Law Universities (CAN Foundation) will begin shortly. 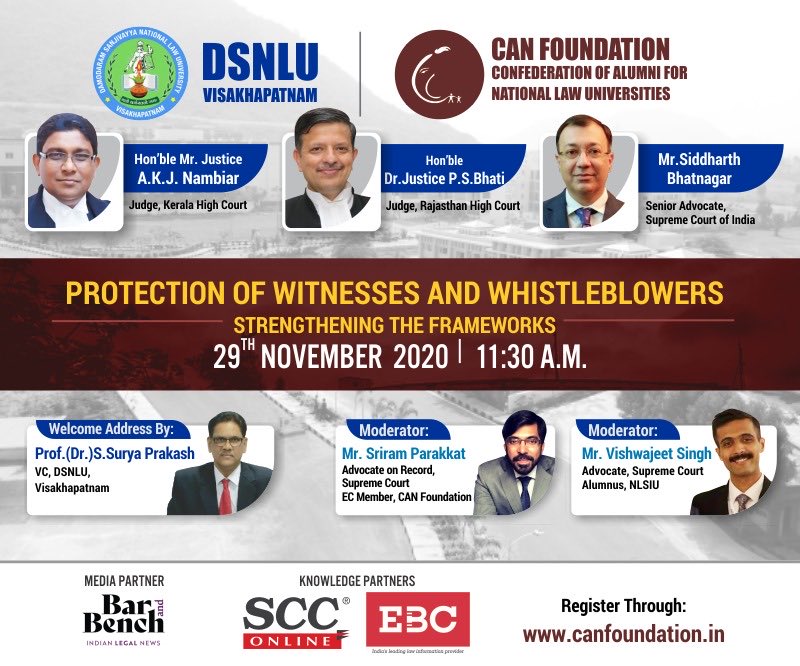 Shivang Dubey introduces the topic of the session and the panelists.

A presentation is being played to give a background on the CAN Foundation. 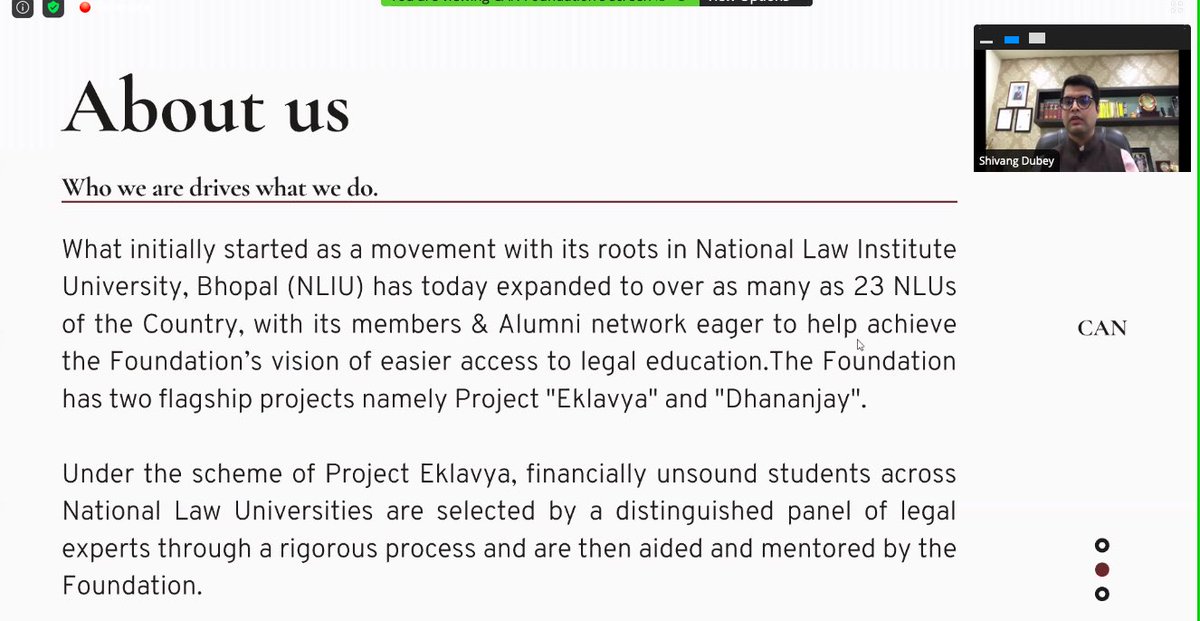 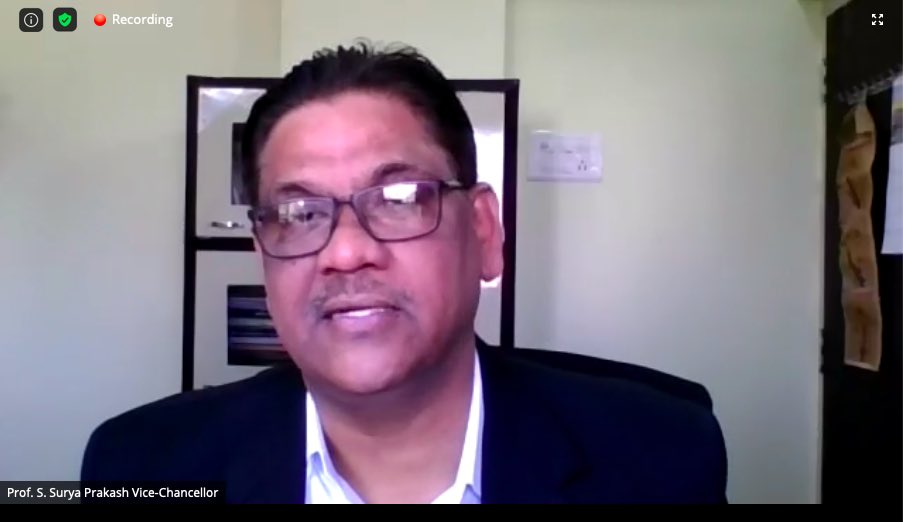 Dr. Prakash states that considering the volume of work that High Court judges have and the back breaking burden, states and the Central government have to do tackle the burden on administration of justice.

@DSNLU
He adds that there are a variety of judgments where depending upon the nature of the offences the judges have considered the cases before them.

Dr. Prakash: For instance, a public prosecutor who was charged u/S.307 IPC, his appointment as PP was cancelled.
There is no doubt that witnesses have to be protected. A classic case showcasing this is the Salman Khan case, says Dr. Prakash.

There were 27 prosecution witnesses, only 1 is by defence: Dr. Prakash.
Dr. Prakash: HC judgment running into 50,000 words acquitted him. Sessions Court convicted him under charges of IPC and Motor Vehicles Act.

His personal bodyguard was no more, the original FIR was missing and you see quite a number of lapses in the judgment of HC.
Dr. Prakash: His driver was introduced into the proceedings after 13 years.
This is a black face in the history of High Court of Bombay. Bombay Bar has given legal luminaries. The High Court has given luminaries.

This judgment however has disturbed me, says Dr. Prakash.
*This is a black phase
Dr. Prakash concludes his address.

Justice AKJ Nambiyar from Kerala High court begins his address.
He congratulates CAN Foundation for their work. 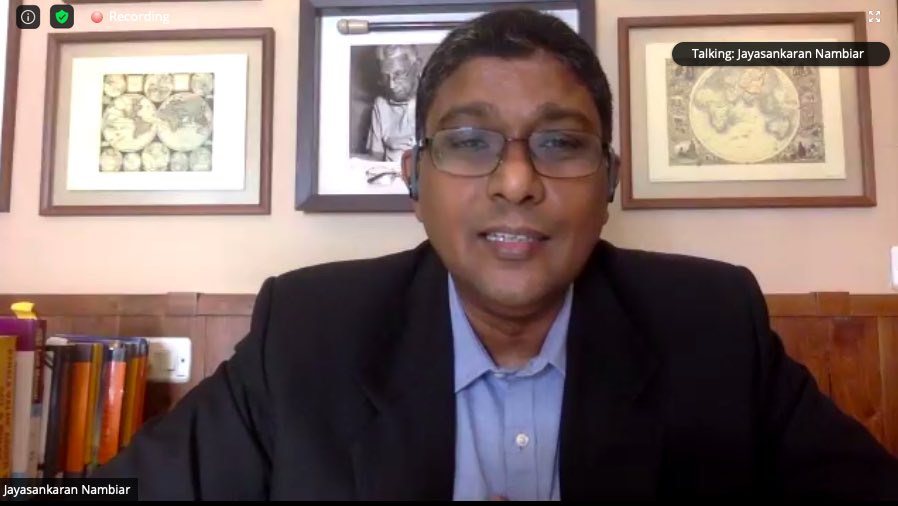 Justice Nambiyar: What is a witness protection scheme? It is a programme where people are willing to speak against accused.

A witness coming forth is seen as an attribute of good citizenship.
It becomes obligatory on the state then to protect him in order to bring the offender to Justice, he adds.
Justice Nambiyar adds: Globally, I won’t talk of countries which have them, because there are many.

But the framework is that there is a legislation in place keeping the objective of the act.

In India the additional problem comes due to the volume of the population.

Hearing to resume before Supreme Court in a short while from now.

The management of company is the board. The most crucial obligation imposed on Director now is that the director is a fiduciary. A fiduciary's allegiance is to the company alone: Divan

Lack of probity is much broader than financial irregularities.

The long relationship between the two groups developed over decades. It developed in the context of a statutory framework which restricted the role of private trust: Divan.
COURT

He speaks of how the pandemic and social media has taken the Court out of the Courtroom into the public realm.

With platforms such as @LiveLawIndia and @barandbench giving a blow-by-blow account of court proceedings, interest in constitutional law has grown, he says. 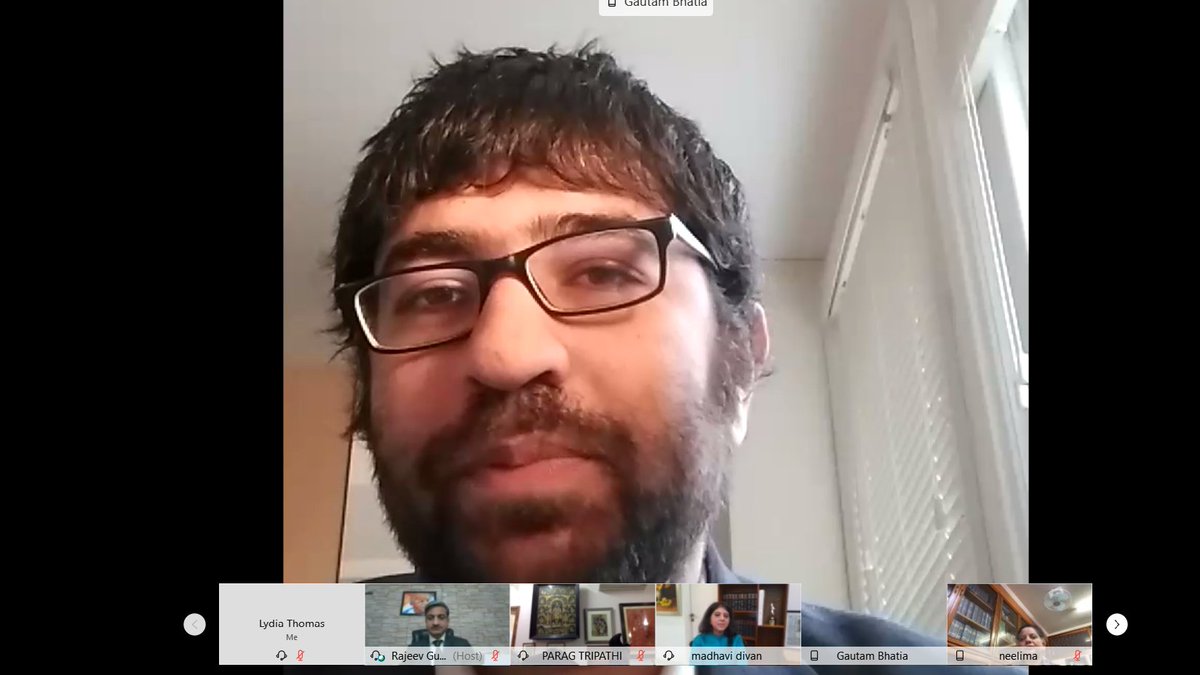 She narrates her journey from a law office that was predominantly handled commercial matters.

She opines that it is important to have a multi-faceted grounding in diverse streams of law before specialising in one. 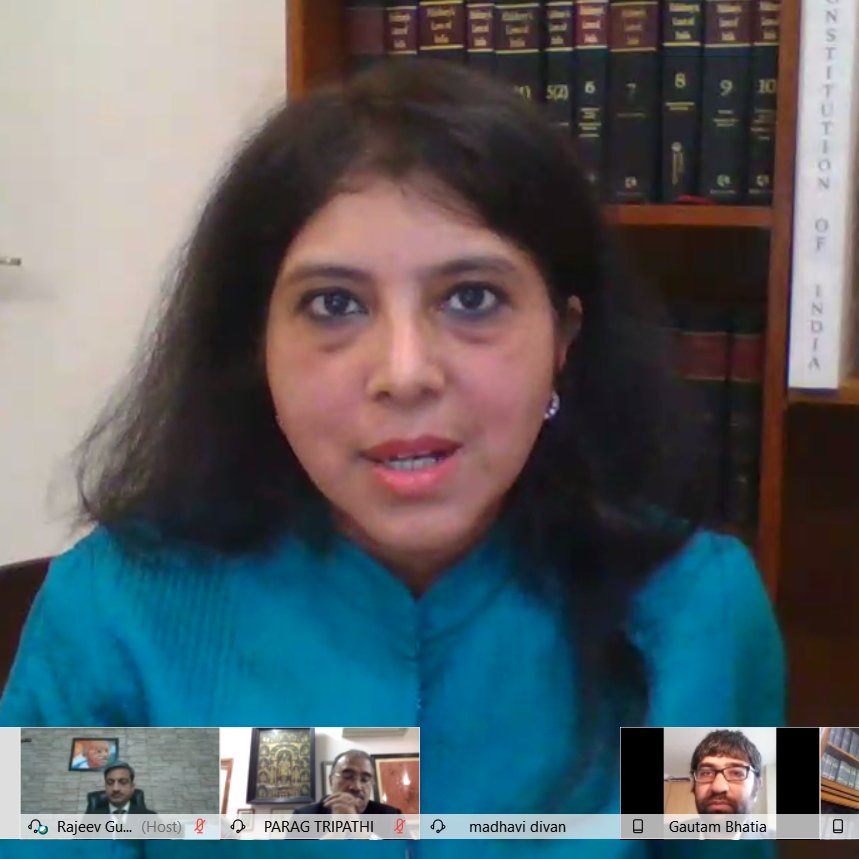 After the transfer of Judge Vishal Pahuja, parties are making arguments afresh.

John sums up the submissions made by her in the previous hearings.

It is my truth, made in public interest and good faith: John

The matter is before Justice Prathiba Singh.

Yesterday the Court had issued notices to NBSA, @TimesNow and @news18dotcom

Hearing begins. Counsel inform Bench who they are appearing for.

1. Directions to R1-6 to take down from their online platforms references to the "so-called WhatsApp conversations"

2. They be restrained from disseminating any particulars of the investigation not part of public record

3. That they be directed to strictly comply with programme code in reporting

4. R1-2 be restrained from divulging, sharing with media any material which is part of casefile either by press briefing or otherwise until filing of the charge sheet

Our original constitution copy was then sent to Survey of India office where these handwritten copies were copied and distributed to its members. Even now, very few copies are freely available in the market.

Constitution of India is not only a beautiful document but a beautifully presented document too. Illustrations include Mohenjodaro period to Vedic and Epic periods to that of Maurya and Gupta Empire. 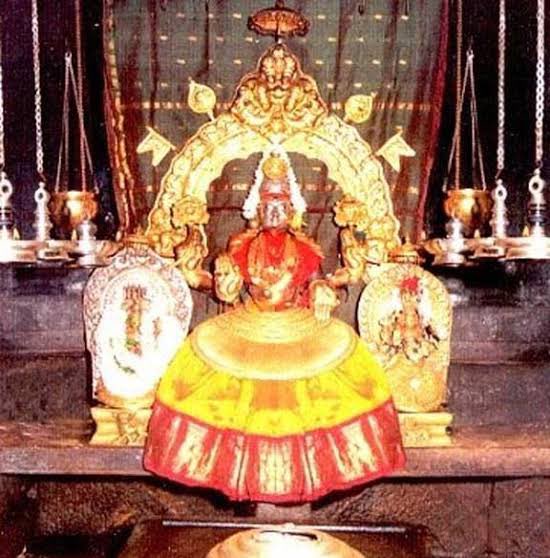 We The Inevitable
@WeTheInevitable
This is from the official Under Secretary of Defense for Intelligence DOD account on Twitter. Ezra Cohen-Watnick - after being appointed by Trump to chair an influential declassification board - "likes" a tweet that implies he is "Q."
119/7 = 17 & Q = 17

119 \u27977 is now the Chairman of the Public Interest Declassification Board. This new information could be of importance to many. I wonder what that could mean for those who have taken actions to obscure potentially damaging information from the public view?

I can’t find the like , or it appears to have been “unliked” but here’s a video of someone who claims it was there just a few hours ago

This comes from the JFK grandchildren video singing “Timber”

Check the domino. Posted to 4ch it has zero returns on tineye

Dr Catherine Pemble is...
@CatherinePemble
Right, screw it. Here's a thread on *that* FBLive by Alex Cairnie about #Govanhill. Lets do a watch-through shall we? (Mind, I'm a resident of Govanhill, and a sociologist. I'm also 5'3, and a visibly queer woman so if half his claims are true I should be living in terror)

00:30: Welcomes viewers and uses points out that his videos are only getting attention b/c they're 'horrific'. Directs folk to his Youtube page. So already clout hunting.

1:08: "I've been warned to stay out of Govanhill. I'm a marked man" (proceeds to use a beanie as a disguise)

1:30 "Laughing and joking aside, here's somebodys front garden." Proceeds to show litter and claim its thrown from windows and this is 'common'. I know a handful of streets with litter issues like this, but its neither common nor unique to #govanhill and other deprived areas.

3:45: He's had offers of help, but hes said no because hes not responsible for 'anybody elses safety' Good lord.

6:00: TW: child abuse - He starts claiming to have been contacted by a health professional and told about child abuse 'in the area'. Huge ethical issues here as the 'professional' who has 'been in the game a long time' is reporting to Facebook Dude and not authorities.

Rani Gaidinliu joined the freedom struggle at 13 &was sentenced to life imprisonment at 16."We r free people—the White should not rule over us.”Thus calling out to her Zeliangrong tribesmen was the voice of 13yr-old Rani Gaidinliu. 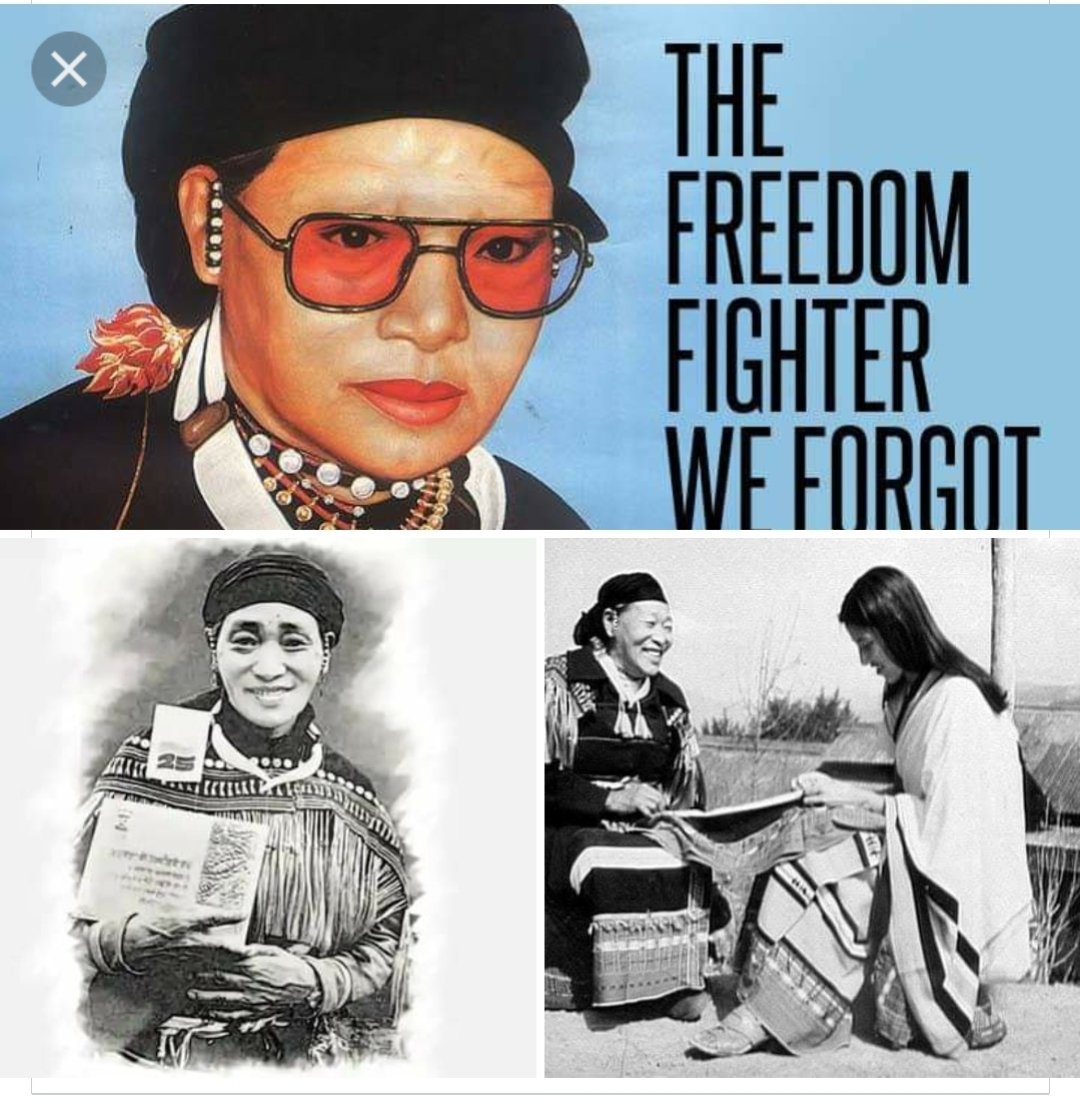 She joined the freedom struggle in the present-day Northeast India. Today, her struggle is lost in history as most of her countrymen wouldn’t even have heard her name. B'coz our history textbooks tell us that only Mahatma Gandhi &Pandit Nehru got India its Independence.

At 16 yrs of age, this valiant girl was sentenced to life imprisonment for leading a movement to drive out the colonial rulers from Manipur and Nagaland. Nevertheless, she was released in 1947 after India’s independence and was given the title ,"Rani of Nagas".

Gaidinliu belonged to the Rongmei clan of the Zeliangrong tribe in the Tamenglong district of western Manipur. Born on January 26, 1915, she was fifth among eight children.

Her native village was Nungkao, which is present day Tamenglong distt. Brought up in a specially backward region,she couldn't receive any formal education. However,this didn't stop her from joining the freedom struggle. At the age of 10 she came under the influence of her cousin. 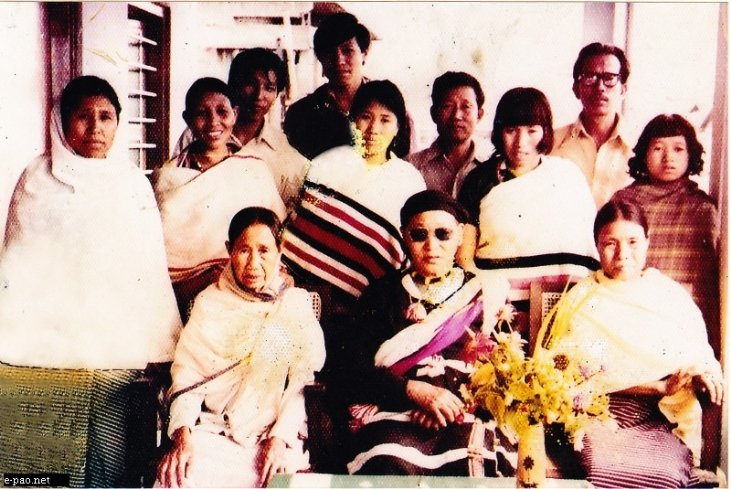 This is a beautiful story of Guruvayurappan. Once there lived in Guruvayur a poor family. Kitta, his wife & kids were struggling for their daily needs. With only a coconut tree in house, he earned a living by selling coconuts. 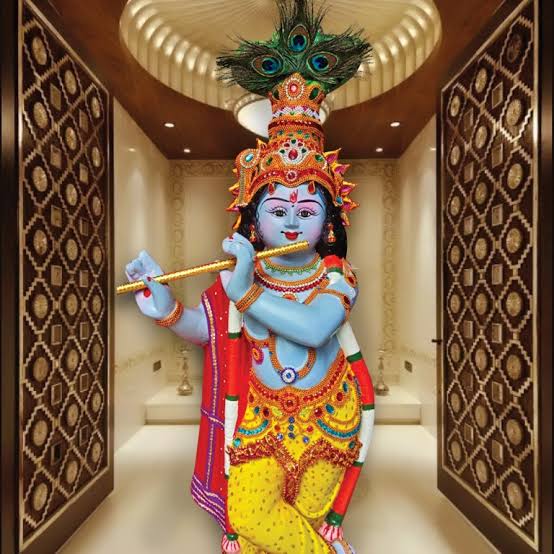 Kitta was from a low caste family. He was a great devotee of Guruvayurappan. Everyday before going to work he always prayed infront of a picture of Guruvayurappan in his house. His only wish was to worship at Guruvayur & have annadanam in temple. But he was not allowed there

It was Utsavam time in Guruvayur. From far behind kitta and family worshipped Guruvayurappan. Annadanam was given daily and no one was left empty stomach. Only Kitta didn't receive. That night, it was only Kitta's family who was sleeping without food. After temple nada closed 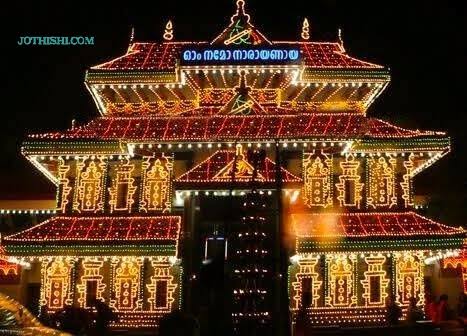 Shri Krishna, dressed himself as a Brahmin went to temple Kitchen. He packed food and went directly to kitta's house. Reaching Kitta's house, Shri Krishna told he was sent by a cook of Guruvayur temple and gave them the food he packed. Kitta and family was very happy seeing food. 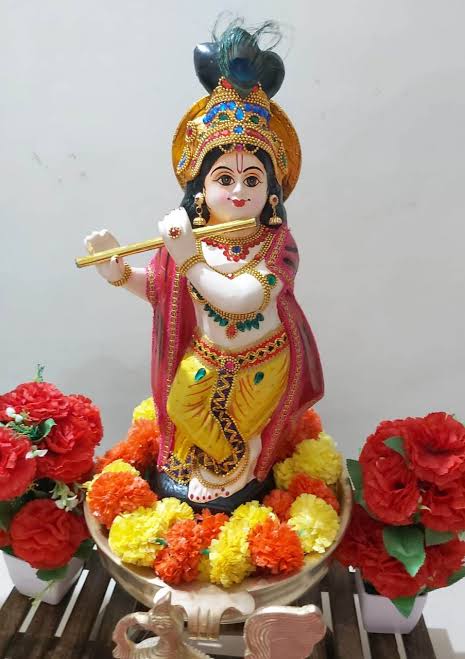