BC INDIA
Saved by @Jacobtldr

Sharing one incident... After Modi's Trichy youth conference, the very next morning when police were clearing up their mini-control room, they found 5 strange boys who were roaming there with bags. When police enquired them "Sir, we are from Subramaniapuram in Trichy.

Whatever political meeting or conference is held in this ground, we come here on the same night or morning hours to collect the Liquor bottles to sell in the scrap shop for 50 paisa to 1 rupee per bottle and we used to earn Rs 200 to Rs 400 on each such event.
Even in the last DMK meeting the very next day we collected around 1500 bottles. But for Modi's BJP meeting, we could not find even a single bottle in the whole ground. We are coming around and around and not a single bottle in any corner of the G Corner ground in Trichy,
we are much disappointed, sir!". Police seem were stunned and pleasantly surprised. This is what Modi magic does in this nation. Modi is the one who can lead our nation and make everyone prosper with hardwork in right direction and proper approach.
This funny but interesting anecdote was published by a statewide local daily Dinamalar. I have just translated and posting it here for rest of the nation;
We should realise Modi is liked by every patriotic person in this nation especially by well educated, well mannered professionals and even normal public across the nation.

Live Law
@LiveLawIndia
Supreme Court considers the suo moto case "IN RE: TO ISSUE CERTAIN GUIDELINES REGARDING INADEQUACIES AND DEFICIENCIES IN CRIMINAL TRIALS".

Luthra : On March 5, 2020, a report on draft criminal rules was submitted after a colloquium with High Courts.

Luthra : After the draft rules have been circulated, we have only received responses of High Courts of Andhra Pradesh, Telangana, Allahabad and Delhi. As many as 20 High Courts have chosen not to respond.

CJI : We are thinking we will give High Courts to appear within 2 weeks. They may give suggestions to the draft rules or may accept the rules and give a statement regarding willingness to implement the rules in HC.

Gaurav Sabnis 🇮🇳🇺🇸...
@gauravsabnis
Most elite Indians (primarily savarna white collar urban english medium educated folks like me) land on Western shores convinced that we are just as advanced and developed as these countries as a people. It's just "corruption" in India holding us back. Then reality hits. /1

We see that the West works better on a daily level, but not because of some mythical genetic or societal immunity to this mythical "corruption" villain. Cos there is corruption in Western politics too. They seem to have institutions and systems built over ages to minimize it.

But most Indians who reach these shores are engineer/mba/doctor types. Trained in secondary vocational type disciplines. So our default approach is to find a quick engineering type solution. We have almost zero exposure to sociology, psychology, economics, anthropology, etc.

For anything, I thought I knew the best. Why was this Obama fellow not trying my absolutely brilliant healthcare reform plan that I have posted on a blog with nice tables and graphs and references to IIT and IIM slang? Does he not know I'm from an IIM? <1% acceptance rate!
INDIA
Advertisement

In Nov 2018, a man from UP’s Shamli named Saleem gave an affidavit in local court that he and his family were changing religion. News leaked in local media and became national news. I also visited him and wrote a report +

Saleem was born in Hindu Jat family and named Susheel. He was left orphaned at 8. One Mohd Sabdar picked him from streets and took him in as assistant in his transport business. Sabdar changed his name to Saleem and even got him circumcised as Islamic ritual +

When he turned 15, Sabdar got him married to Wajida. As Saleem grew independent, he left Sabdar & began to work for another transporter, a Punjabi Hindu. Susheel told me Sabdar never paid him a salary

Wajida supported him. Things were fine till her father Israel arrived from Jharkhand. He tried to change Saleem’s mind. When he remained adamant, Israel brainwashed Wajida into leaving him. When Saleem went for a tour, Israel quietly took Wajida and their 5 kids to Jharkhand +

Saleem immediately went to Jharkhand on his return. Israel asked him to read kalma again and serve Tablighi Jamaat for 40 days as penance. Saleem refused. He did not have Wajida’s support anymore.

On 16 Jan, he sent me a Whatsapp video saying he was ready to commit suicide +

"One of the major MDF player in India"

Here are the key highlights of the call 😀👇

- The current quarter looks good so the company is planning for 100 percent to 110 percent capacity utilization for both plants.

- The company have divided forex loss in 2 parts: 7 crore in interest and 1 crore above EBITDA.

- Company have sold out some assets of subsidiaries and also faced operational loss which can be experienced again.

- Exports market: Anti dumping which was announced couple of weeks back has been confirmed by the government. This will improve the margins.

Vijay Patel
@vijaygajera
How Kejariwal and AAP involved with Pro Khalistan and how they do financial fraud!

In November 2015, AAP’s Sanjay Singh and Ashutosh went to Canada and USA along with few other leaders for donation drive. 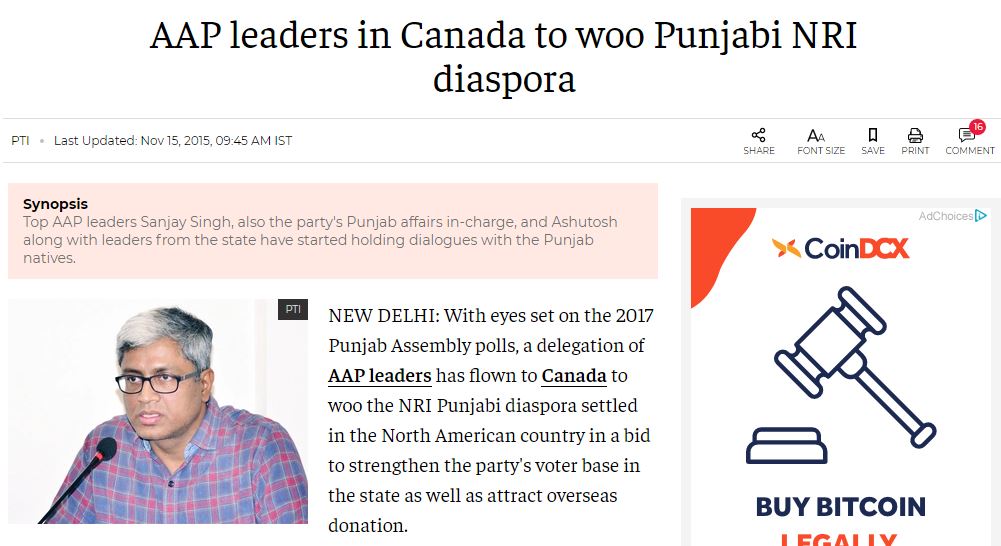 About this trip Ashutosh said that "The Indians working in Canada not only hold economic power because of the money they send back, but can also influence voters. More importantly, they are also a major source of fund for the party"
They receive major funds from USA,Canada & UK 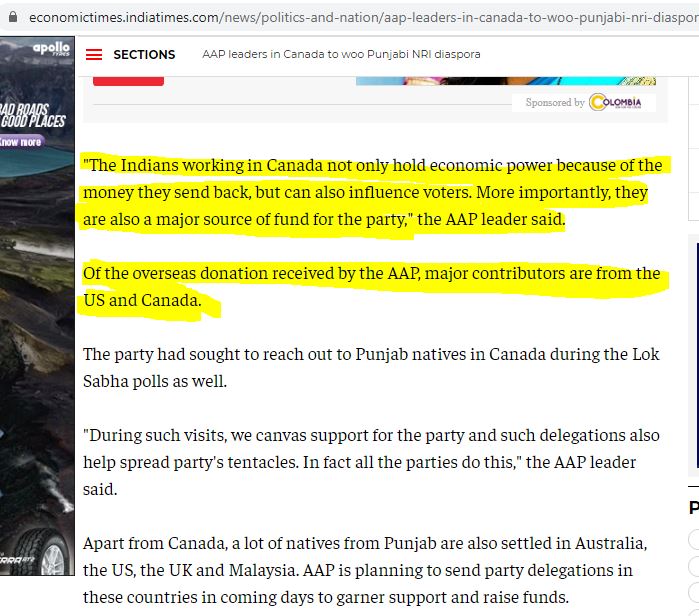 In 2015 Sanjay Sing visited Canada 2 times. But interestingly you won’t find any details about his second visit in public domain!
In that visit they met so many pro-Khalistani leaders and discussed they future plan
Pro-Khalistani Leaders have promised them huge financial support 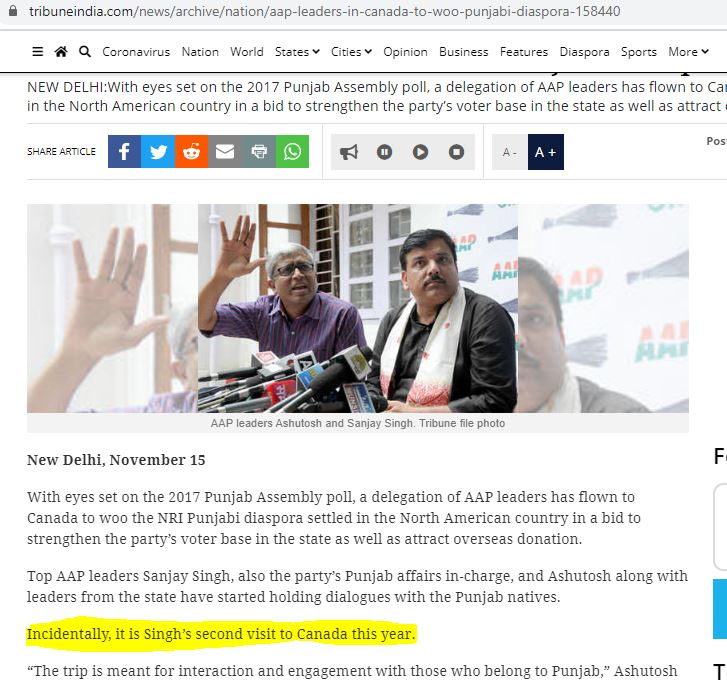 Now let’s see how AAP is involved in Farmer protest on ground.
In December 2020 few NRI reached to Protest site by claiming that they are here to support farmers, but actually they are AAP’s Canada Unit!
They all were here during Punjab election, you can see it in below news. 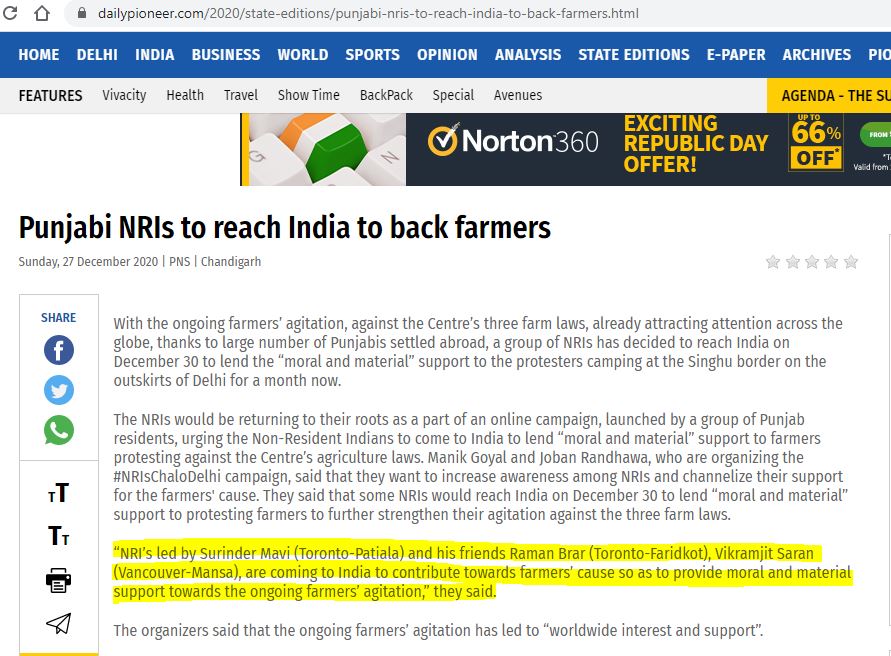 During Election in Punjab Kejariwal stayed in the house of Khalistan Liberation Front (KLF) terrorist Gurwinder Singh.
Not only that, terrorists were openly campaigning for AAP in Punjab election. 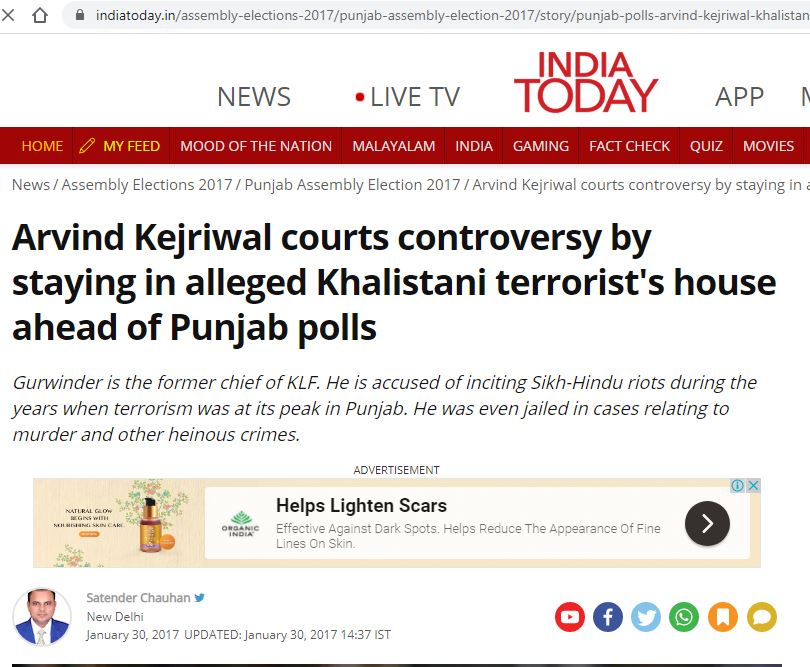 Chris Baty
@chrisbaty
I can feel it in my bones: NaNoWriMo starts soon. If you meant to do some novel planning this month but never quite got around to the planning part, here are a few questions to help you think through your story arc.

These questions are based on Hollywood screenplays, the hero’s journey, and the work of writers who are much smarter than I am—looking at you @RachaelHerron and @LaniDianeRich and @darynda. I didn’t invent any of this.

And, it's totally okay to do no outlining and just wing the whole dang thing! Or do your planning in a wildly different way. But I've found these questions useful. So.

All of us are missing something. Maybe it’s a feeling of danger or true love or a sense of higher purpose. Maybe it’s a large animatronic penguin that can dispense boba tea through its nostrils. For our orphaned boy, it’s a sense of belonging.
WRITING

Being a breast surgeon, he was troubled with women consistently coming with advanced cancers, and he set out to see if he could work on picking them up at an earlier stage. But community-based early detection needs money, and he just didn’t have it.
ALL , LIFE SAVER DR INDRANEEL MITRA
Advertisement

The four defendants will be Matt Hancock, Chris Whitty, Patrick Vallance and Neil Ferguson, each of whom has inextricable and ultimately incriminating connections with Bill Gates and Big Pharma.

As well as three counts of fraud by false representation and seven counts of fraud by non-disclosure, under sections 2 and 3 of the Fraud Act 2006, we can now also prove that the entire worldwide scamdemic originated on these shores.

In fact, we can show that, without the dishonest statements and non-disclosures of the four defendants we are initially proceeding against, COVID-1984 would not have transpired.

Furthermore, the 1st defendant, Matt Hancock, cannot rely upon the defence of Parliamentary Privilege, on the ground that none of the evidence relied upon by the prosecution is capable of preventing parliamentarians from carrying out their lawful business in Parliament.