Most commit messages are next to useless because they focus on WHAT was done instead of WHY.

You were almost certainly thinking "WHY is this like this?", not "What is a one-line summary of what happened in this commit?".
Here's the antidote: use this commit template (stolen from @joeferris).

Secondly, if you train yourself to ask why you're making every change, you'll tend to make better changes.
Give this template a try for a while.

The first time you see a commit message like the above instead of "refactor OrderWidget", you'll be a convert.
For more thoughts on this topic, and details on setting up a commit message template, check out this post.

https://t.co/8e9p3x0zb0
Also! Here are a few examples of this commit message template in action:

Mike Metzler
@MTZLER
I’ve been flooded with Snapchat Spotlight questions after posting I’ve qualified for a payout 4 times. Here are the answers to the most common questions I’ve gotten in my DMs. These answers are my own experience and may differ from others .

Q: How will I know if I am getting paid?
A: You will get a message from Team Snapchat that looks like the below message 2-3 weeks after the snap has gone live. At this point it important that you verify your email address. 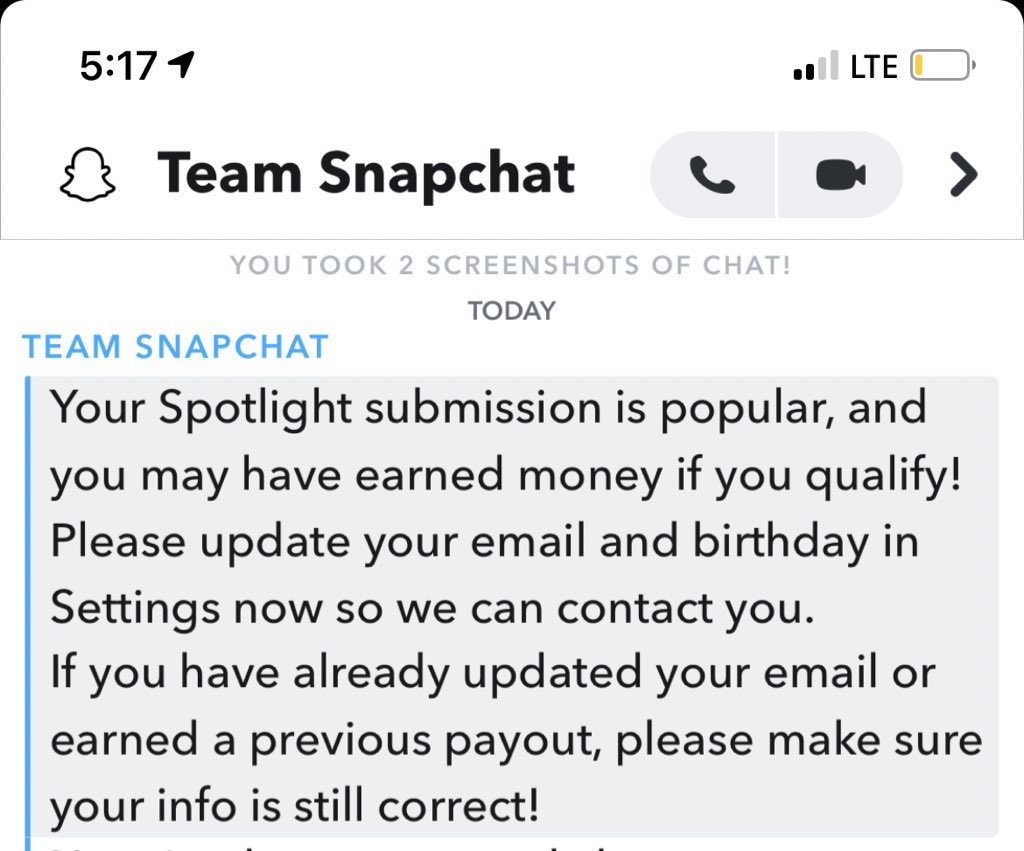 Q: How long after I’ve been notified I qualify, will I know for how much?
A: my experience is that usually 7-10 days after you get the qualifying message, you get a message with the amount, it will look like this. This message will include a unique access code for HyperWallet. 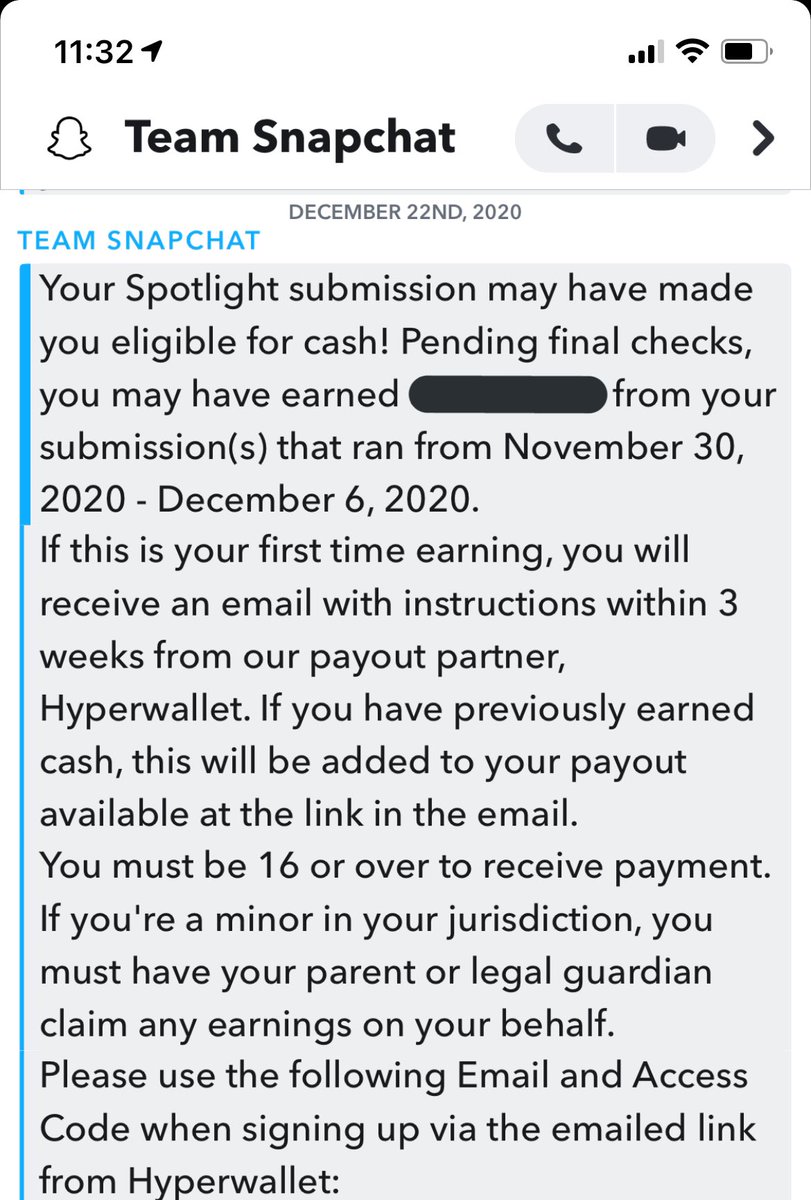 Q: How do I set up my HyperWallet?
A: Around three weeks after you get the payment amount you will get an email to your verified email from Snapchat Pay. It will look like this and will require you to fill out some tax forms, takes like 10 min. 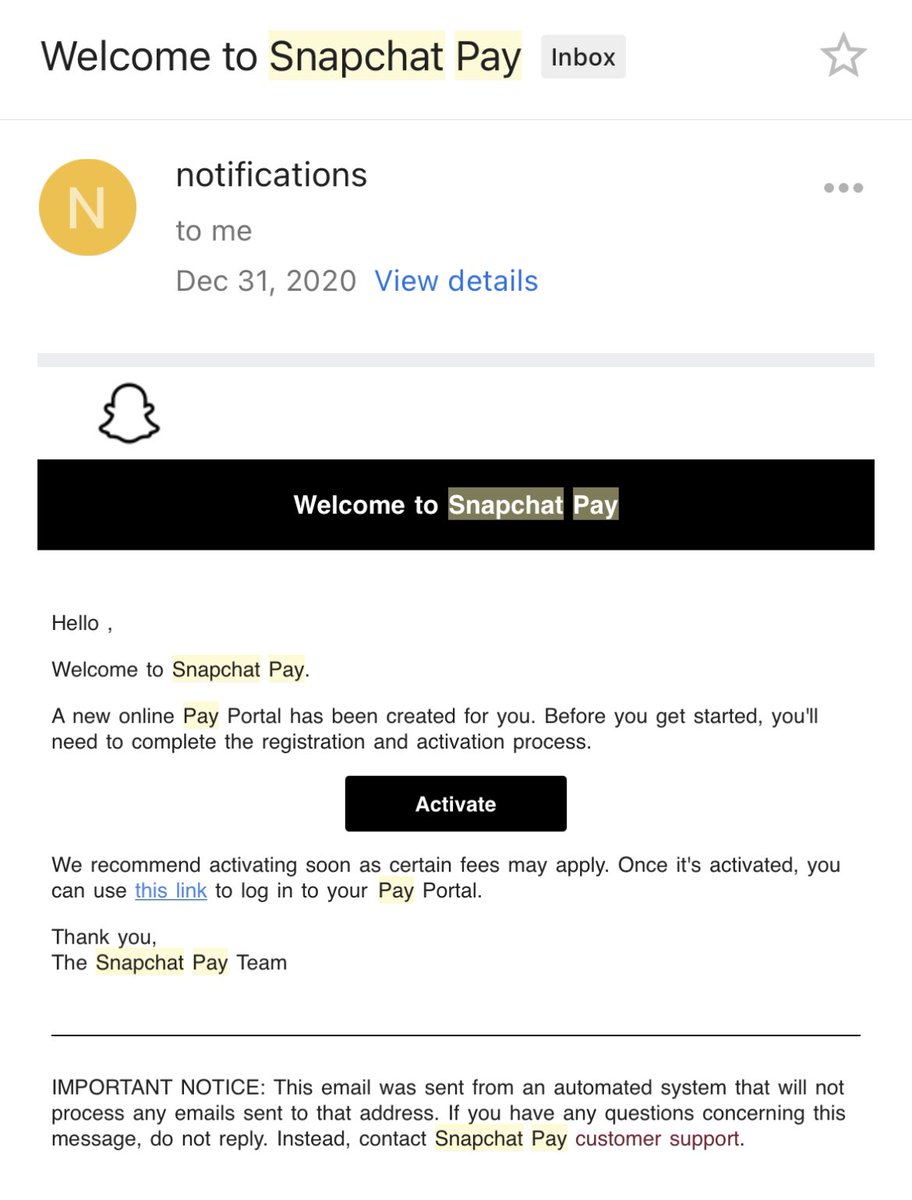 Q: How long does it take to actually get the money in my account?
A: it took me like 7 days from when I had my HyperWallet approved before I got the money into my HyperWallet account. I recommend you set up auto withdraw. You can send money to PayPal, Venmo or bank account.
TECH
Advertisement

By 98, when I went to college, Java was already used for all the first level courses in the CS program.

How did it catch on so quickly (just 3 years) to shift university curriculum, which is usually so slow/behind?

I wonder why Java was so respected and JS was not? Why/how was Java already seen as such a stable and mature language?

Not just Java, other languages (like python) were also released around/near 95, and also seemed to get to "mature" respect status. much quicker.

I bring all this up because my impression of Java in 98 was that it had been around "forever" (as had C++ first developed in 79, but not standardized until 98!), but that's not. true at all. These were all new languages around the same time.

I'm sure the language designs had different merits, and the target applications meant a different perception and reception, but...

it sure seems like the industry (and academics) just decided Java and C++ were the stable mature ones and langs like JS were toys.

BTW, before you assume JS was nascent/immature b/c the web wasn't much of a thing yet, remember that JS was actually released as LiveScript on the server before it was released in a browser. So "server-side JS" was always part of the story, not just Node 15 years later in 2009.

Mateusz Czeladka | Pla...
@matiwinnetou
(1) Since some people laugh at Cardano project and it's peer review aspect, let me share a story from work for all of you
(2) There is company called Databricks and they open sourced recently a technology called: https://t.co/gpZyKKiMVD . This technology is super important

(3) In BigData delta allows one to perform DELETE and MERGE operations contrary to Hadoop + Hive where this is not possible, seeking through many partitions finding customer data to remove and then rewriting it is not only expensive as an operation but also very dangerous

(4) This promising technology is something that many companies, which have big data turn into as they need to be GDPR compliant.
(5) I was always reading and accepting all details from their website as given and the "truth"

(6) There is however an amazing Principal Developer at our company that found some of the claims from their website as dubious, e.g. ACID claims on such a distributed file system
(7) It turns out this is not the first time this company advertises something that is simply not true

(8) on another occasion this company made untrue claims about Cassandra database and this then became source of disputes e.g by dr. @martinkl - my fave expert in distributed systems
(9) All professional developers also know of course famous Jepsen tests ->
TECH

Austin Energy
@austinenergy
LIVE: ❄️ City of Austin leadership including @AustinEnergyGM will address the unprecedented severe weather.
💻 Due to tech limitations, it will only be available via Facebook Live here: https://t.co/PchiwUgP0M
We will be live-tweeting in this thread.

Mayor Steve Adler: This will require us all to come together and help one another.
City Manager Spencer Cronk: As a City, we are doing our best to help those in need.

Cronk: Stay off the roads and conserve energy. Every little bit helps.

COA Office of Homeland Security and Emergency Management Director Juan Ortiz: Currently we have a warming center at the Palmer Events Center. You can show up at any time. As of this morning, cold weather shelters remain active. 282 were sheltered overnight.

Ortiz: Urge residents to conserve much power as possible to help with the emergency issues. We are working with critical facilities to ensure that access to those facilities remain open, so ambulances can get in.
TECH

Things you do need: a product that solves a problem for someone. That's it.

If you solve a problem for someone, you will be surprised by how much you don't need.

If you don't solve a problem for someone, you'll be surprised by how much won't help.
STARTUPS

I've been a @23andMe customer for a while, and have followed their ancestry updates closely.

All is more or less as expected....except for this bit about Native American.

The family is almost completely composed of Spanish peasants (from various regions) who emigrated, along with a massive wave in the late 19th-cent./early 20th-cent., to Cuba back when it was a booming economy (richer than Spain's) and worth emigrating to (Communism killed that).

Also, the native population of Cuba was annihilated early on---was the first place the Spanish colonized after all. Having a native background in Cuba would be like having the same in, say, Massachusetts, particularly if you're (say) mostly Irish. Just really, really unlikely.

(Note: the North African/Arab background is less mysterious. The Iberian peninsula was part of the Muslim world for centuries. It would be odd *not* to have some Arab/Middle Eastern background coming from Spain. Given the family is mostly from Northern Spain, it's small though.)

I have a Spanish passport, have been back to the ancestral villages in Spain, seen the church where my grandmother was baptized, my grandfather told me stories about growing up as the child of Spanish colonists in rural Cuba. The native bit just clashes with all the family lore.
ALL
Advertisement

Tierney
@MaggiePeggy123
1) Looks like Trump KNEW what the coup plotters were plotting on the 6th, so he arrived an hour late to the stage, and talked longer than he intended, before he asked MAGA to walk peacefully down Pennsylvania Avenue to the Capitol.

He also didn't walk WITH them as he promised.

Corey Haines 💡...
@coreyhainesco
There are some amazing founders and indie hackers that have made 🤯-worthy progress this last year.

The stuff you can do in a year is seriously astounding 👇

I was one of their first customers and the progress @mijustin and @jonbuda have made working mostly part-time has been crazy.

@daviswbaer joined as a co-founder and through many different marketing tactics, pricing changes, and product updates, they've managed to carve out a niche market in a really competitive industry.

After getting fired from his full-time job, @_rchase_ embarked on a year focused on building products to replace his salary in a year.

The dude seriously SHIPS and even took investment from @earnestcapital

👉 @ClosetTools $11k MRR WHILE WORKING FULL-TIME AND WITH A FAMILY: https://t.co/pKQ7pFvpZY

With a strong product, continuous improvement, and SEO, @unindie has really been inspirational.

There are no excuses.

This year is flying by. How am I doing a July report already? Here it is: Closet Tools' July open stats:

Less trials, more revenue (churn is going down!). The focus for July was feature stability. pic.twitter.com/4YRpkPvKxo

Tashny Sukumaran
@tashny
Surendra Ananth @surendraananth, you violated my conditional consent. I assented to unprotected intimate relations with you on the STRICT condition that you tell me if you have relations with anyone else. You failed to do so, and I became ill as a direct consequence.

You refused to reveal your own STI results to me, but claimed to others they were negative and alleged I had multiple other partners, slut-shaming me. You gaslit me saying you had told me about your other partners.

You called up @justice_sisters and @SistersinIslam to tell them I was crazy, jilted. You rebuffed attempts to organise a community mediation so we could address matters. You said I was crazy for speaking to your boss and father in an attempt to keep other women safe.

You have a PATTERN OF BEHAVIOUR of misogyny, harassment and sheer disrespect for women. This was sent to a friend of mine who has never expressed interest in you and has a partner.

You think women are playthings, notches on the bedpost. You, @surendraananth, are no human rights advocate.