Statement from the #JusticeForShukriAbdi Campaign

17 months ago,this campaign was created in the wake of the tragic death of Shukri. Since then her mother Zamzam &her family have faced what can only be described as a never-ending nightmare as she demanded answers & the truth of her beloved daughter's last moments on this earth
This vulnerable refugee mother, whose daughter was taken from her in dubious  circumstances, was left in limbo with unanswered questions and her own trauma to deal with all the while trying to support her other children come to terms with what had happened to their older sister
Her family protected her the moment she stepped onto UK soil, but sadly those authorities who should have protected Shukri Abdi, categorically and without question, failed her.  The facts are now firmly out there for the world to see that this was not merely a 'tragic accident'.
This campaign was set up to protect & provide support for the family, & to fight alongside the legal team to ensure that the truth of Shukri's death was exposed, & to ensure that no family ever has to experience the obstacles this mother had to face to simply get to the truth
That was and has only ever been our objective. It was only through the determination and persistence of the family and this campaign that a deeper investigation was secured and only through widespread calls for action that we have got here today.
The investigation of Shukri Abdi’s death & subsequent investigations by the school, police and other local authorities have come to represent yet another example of the institutional racism riddled throughout this country.
Shukri’s family were failed by the school who failed in their duty of care to protect her despite being aware of the bullying she was facing, & after her death they treated the family so badly Zamzam walked out of a meeting after a whitewashed report was put in front of her
Shukri’s family were failed by the police who did not investigate her death comprehensively, and throughout this Inquest they have spoken down to Zamzam and her family. They have learned no lessons since the Macpherson report.
Shukri’s family were failed by the very institutions they were meant to trust - by the ones that were meant to protect them. If the school has taken Zamzam’s concerns seriously, we may never have had to be here today.
Playground racism whether the SIkh Boy in Telford, Jamal the Syrian refugee in Huddersfield or even the tragedy of Ahmed Iqbal Ullah in Manchester all those years ago - schools have failed to learn any lessons and to protect our children.
This year has seen a increased light shone on racial injustice in this country, with millions across the world joining #BlackLivesMatter demonstrations and Shukri’s name rang out in cities across the globe to mark one year since her tragic death.
Shukri is no longer with us, but the underlying issues that led to this tragedy remain. Institutional racism, Islamophobia, the demonisation of refugees and migrants continues to this day.
We ask everyone to carry forward the determination and strength Zamzam and her family have shown in the struggle against these injustices and this time when we demand action, we must persist because no family should ever have to go through this ever again.
It is with the support of those people who loved her,her community&all those who made sure her name was heard across the world that we declare this campaign has not ended-it goes in as we support the family with the end of the Inquest & continue on the long hard road to justice

The suit seeks to curb irresponsible and derogatory remarks against the film industry.

The matter is before Justice Rajiv Shakdher. 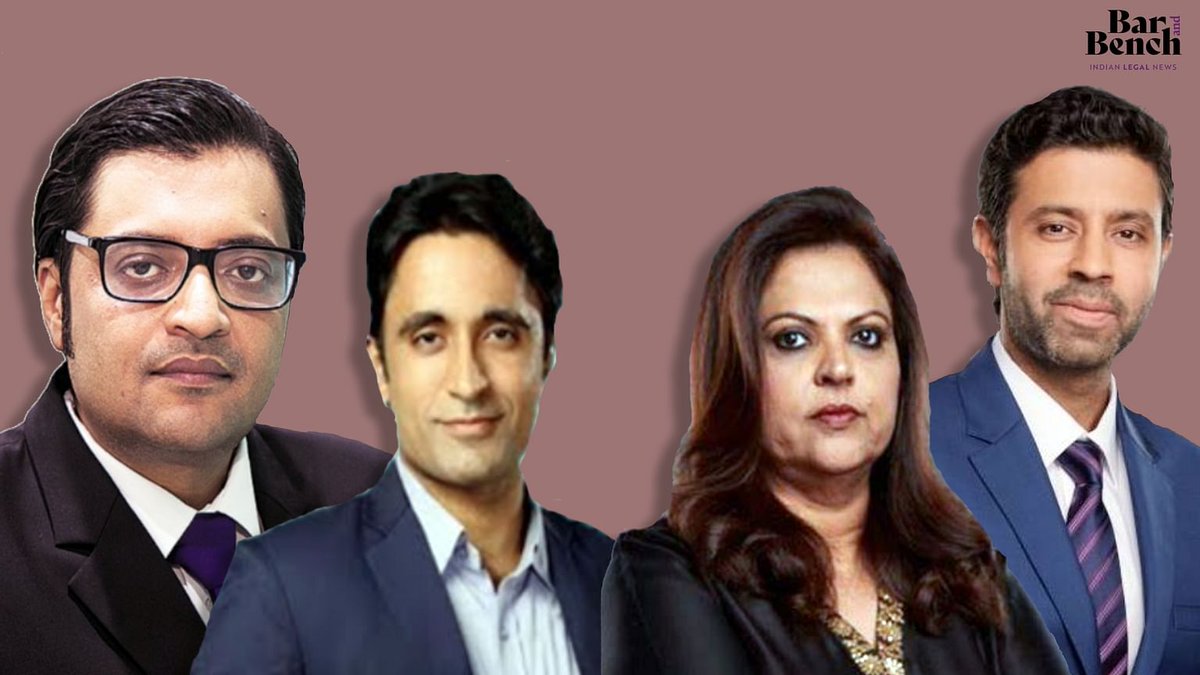 Entire schedule has been disrupted because if pleadings not been filed. Republic filed on Saturday and may not be on record : Nayar

There are some applications for condonation of delay: Court

Court observes some applications are not on record.
CRIME

Shannon
@Avery1776
I am content with #HoneyBadger overseeing this over the past 48 hours.

So many cry babies not paying attention.

Scott Hechinger
@ScottHech
Anjanette Young. A 20 year social worker. Just back from work. Police invaded her home. Naked. Begged for clothes. Cuffed. 40 minutes of terror. Apologized & left. Then tried to cover it up. Defender: "What happened that night is the norm in Chicago."

"Chicago police & city officials fought to suppress the truth of what happened that night. They almost succeeded. Now, Chicago Mayor Lori Lightfoot is calling for accountability. But would she have done so if her legal team or police had been successful in burying the facts?"

"We also must acknowledge how Young’s innocence & class are connected to her believability as a victim. Change one of these factors-if they had the right house, if she was not a professional, if she was using or dealing drugs-& maybe we would all be less concerned about her."

If Anjanette Young were, in fact, "guilty," or a less "sympathetic" victim of police abuse, "her experience would be consistent w/ the logic that assumes Black women should be treated w/ suspicion. And, most likely her experience would never be made known to the general public."

The normal course: "Victims & accused are dehumanized,. Many are moved through the system in complete silence. The state decides how their stories are told & what forms of accountability are just. Neither the victims nor the accused are centered in any processes of healing."

⏳Elizabeth Mueller⌛️...
@LizActivate
"The leaked email communication from an executive of #Stratfor says that, as Deputy National Security Advisor in 2010 to #Obama, #Brennan and the White House were determined to:

'go after anyone printing materials negative to the Obama agenda.'"
#NoCPTPP

"#Stratfor has been dubbed the 'Shadow

"In an email written by #Stratfor President #FredBurton to work colleagues, Burton wrote on November 21, 2010:

Tatenda
@tatendam82
Anyone who exposes cults but sells anything is merely marketing their business. real sex cult victims always prioritize healing of their body, soul, mind & spirit-never $. U wont use your experience to make money, gain fame or campaign to be a president. U wont even need awards

People fall for cults because of lust, hunger for power,money &fame. Once they r broken & exploited victims become hardened like their abusers. They get out but use victimhood to get power,money & fame WITHOUT working on habits that led them to become victims in the first place.

I like when ex cult members share their testimonies BUT they use testimonies for selfish reasons. They hold on to victimhood &use it to sell books, lead online cults & have power over people. Most r still broken, spirits infested& lack self control but put themselves out as gurus

Pastors leading churches failed to break curses over their lives.They suffer more than most BUT decided to use knowledge on curses to control desperate people.People r deceived & buy oils &cursed objects while pastor who cant have a job is taking money to afford lavish lifestyle.

Weight loss "gurus" online sell fitness & weight loss lessons. They personally struggle with weight but know many do. They tap into people's desperation to make money from a problem they &many people suffer. Never get paid weight loss infor from a fat or thick person. it's scam!
ALL , CRIME

- No unilateral exit from backstop

.... after reporting this on @SkyNews I get a call from a different senior source that this is “spot on” and further that the Attorney General Geoffrey Cox has not pulled his punches in confirming in legal advice there is “no unilateral exit” from backstop ...

... furthermore I’m told (and this chimes with excellent Times splash this morning re Weyand) that the future partnership then takes its starting point as the activated backstop - ie UK-wide customs union-style arrangement and level playing field.

With no constitutional authority to do so, Congress created a separate form of government for the District of Columbia, a ten-mile square parcel of land (see, Acts of the Forty-first Congress,”

Section 34, Session III, chapters 61 and 62).
The act — passed when the country was weakened and financially depleted in the aftermath of the Civil War — was a strategic move by foreign interests (international bankers) who were intent upon gaining a stranglehold on the coffers

and neck of America.
Congress cut a deal with the international bankers (specifically Rothschilds of London) to incur a DEBT to said bankers. Because the bankers were not about to lend money to a floundering nation without serious stipulations, they devised a way to get their

foot in the door of the United States.
The Act of 1871 formed a corporation called THE UNITED STATES. The corporation, OWNED by foreign interests, moved in and shoved the original Constitution into a dustbin.

With the Act of 1871, the organic Constitution was defaced — in effect vandalized and sabotage — when the title was capitalized and the word “for” was changed to “of” in the title.
HISTORY
Advertisement

1. There's been a lot of news lately about people in the Autonomous Vehicle industry realizing the problem they're trying to solve is much trickier than they initially hoped.

I think there’s a good analogy in a similar technology: self-checkouts.

2. Self-checkouts have been around a while. Companies have been working on them since 1984, and they’ve been in stores around the country for nearly two decades. As you well know if you’ve used one, they also still kinda suck.

3. This is not for a lack of financial incentives! A company that could figure the technology out would be able to replace billions a year in labor. Even a marginal improvement on the tech would be incredibly valuable as current systems feature staggering losses to shoplifters

4. It’s not as if “scanning items at a checkout” is an especially daunting task. It’s considered unskilled labor. Teenagers do it.

Controversy Has Been Caused By The Digging Of A Narrow Channel By A Resort On A Sandbank Near K. Hinmafushi.

Hinmafushi Council President Shan Ibrahim Stated To Sun That The Resort, Which Dug The Trench Creating A River On The Sandbank, Did Not Have Ownership Over The Sandbank.

Officials From The Island Of Hinmafushi Had Traveled To The Sandbank To Stop The Process Of Digging The Trench When They Became Aware Of It, Said Shan.

Officials Were Now Redepositing The Sand Removed From The Sandbank.

TLDR? Haas lost the fight but may have won the war. In having its argument that Racing Point hadn't designed their own car thrown out, they gained clarification that RPFI was a new team.
SPORT