these have been sold as a way to stop infection as though this were science.

this was never true and that fact was known and knowable. 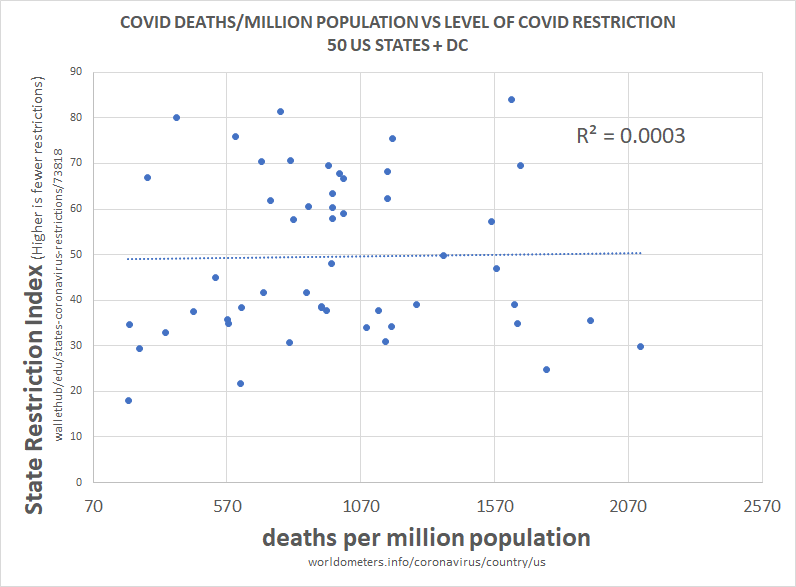 above is the plot of social restriction and NPI vs total death per million. there is 0 R2. this means that the variables play no role in explaining one another.

we can see this same relationship between NPI and all cause deaths.

this is devastating to the case for NPI. 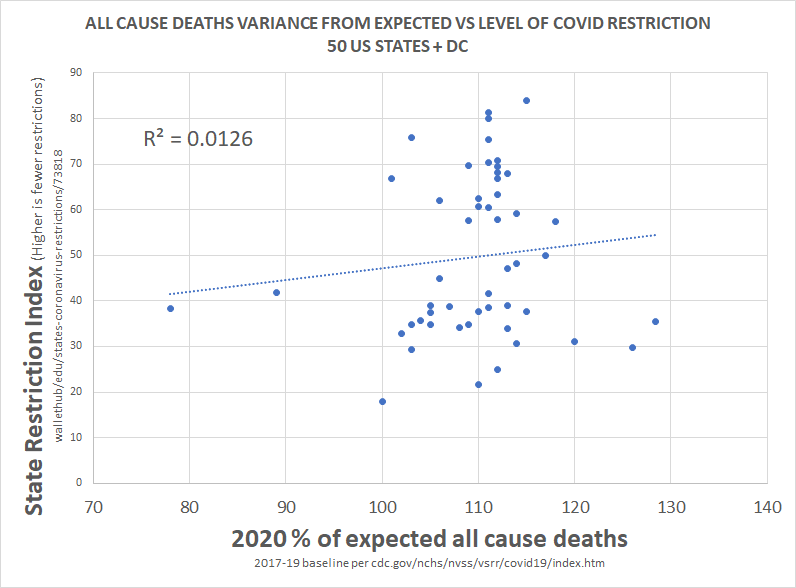 clearly, correlation is not proof of causality, but a total lack of correlation IS proof that there was no material causality.

barring massive and implausible coincidence, it's essentially impossible to cause something and not correlate to it, especially 51 times.

there is no science here nor any data. this is the febrile imaginings of discredited modelers.

this has been clear and obvious from all over the world since the beginning and had been proven so clearly by may that it's hard to imagine anyone who is actually conversant with the data still believing in these responses.

everyone got the same R

this methodology is a little complex, so let me explain what i did.

what struck me is how similar all the curves were.

everyone got the same shape. pic.twitter.com/bN0hILzoSl

el gato malo
@boriquagato
this simple, counter narrative fact keeps cropping up all over the world.

hospital and ICU utilization has been and remains low this year.

it's terribly curious that so few of these monitoring tools provide historical baselines.

It took a Freedom of Information request but @Covid19DataUK acquired 2017-2019 averages for England hospitalizations.

2020 had 18% fewer hospitalizations than prior years.

All around the world, using hospital data without context of prior years is just a fear generating lie. pic.twitter.com/DJDpqhIQuw

this woman was arrested for filming and sharing the fact that their are empty hospitals in the UK.

that's full blown soviet. what possible honest purpose does that

this is the action of a police state and a propaganda ministry, not a well intentioned government and a public heath agency.

"we cannot let people see the truth for fear they might base their actions on real facts" is not much of a mantra for just governance. 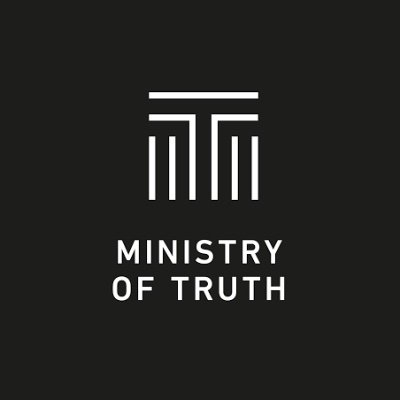 staffed ICU beds are expensive to leave empty. it's like flying with 15% of the plane empty. hospitals don't do that.

and all US hospitals are mandated to be able to flex to 120% ICU.

the US is currently at historically low ICU utilization for this time of year.

can you blame them for mining CARES act money? they'll die without it. 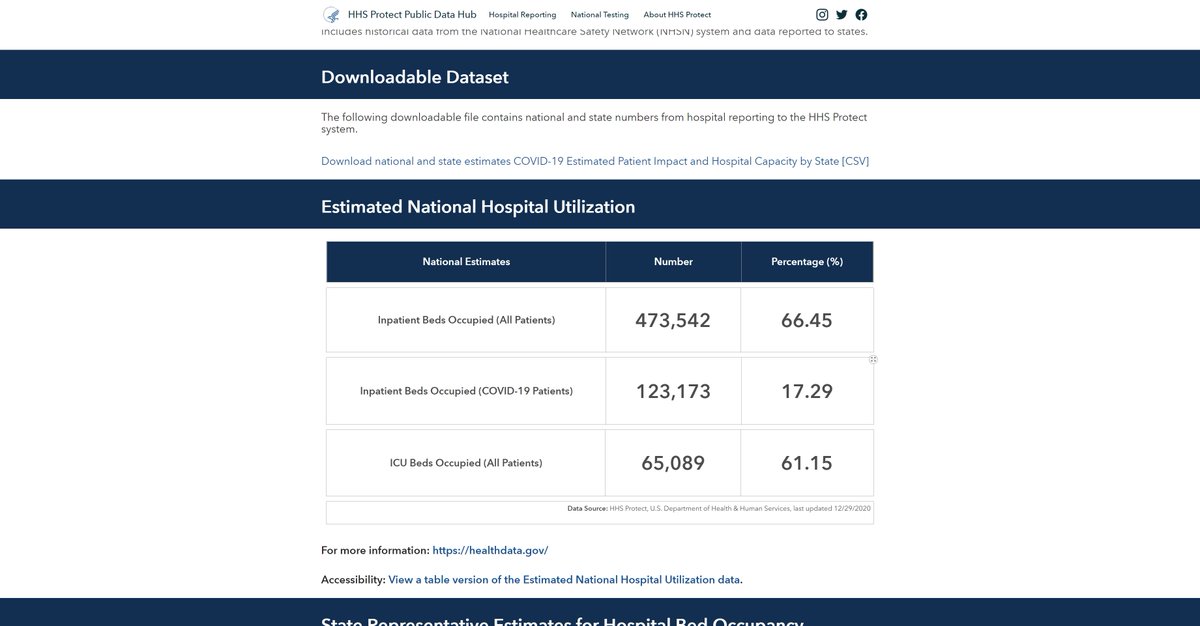 el gato malo
@boriquagato
for those looking for a compendium of mask studies this set from swiss policy research looks useful and has some good links and discussion.

first, the kansas study spread by CDC and so many "twitterdocs" and politicians.

it's a master class in cherry picking and misusing data through truncation.

CDC claims that masks stopped the spread of covid in kansas by comparing masked and non-masked counties.

counterpoint: this was a cherry pick in terms of date and seasonality.

then, covid season hit and the masks look to have made no difference. https://t.co/LgyjqPodOC pic.twitter.com/P2cfuZRtDs

also the mass general study, a classic of the "sun-dance" variant: use no control group and then presume that any action undertaken was the result of some thing you did.

it it the epidemiological equivalent of doing a sun dance at 5.30 AM and claiming you made that ball of fire in the sky appear

it's assumptive, lacks a control, & proves nothing pic.twitter.com/yTdBa7UFit

the good studies do not support use

back in the halcyon days of 2019, before the great politicization of epidemiology turned up into down and down into sideways, the WHO performed a survey of randomized, controlled trials on masks

1100 citations were winnowed to the 10 best for review.

this is a fascinating thread on possible physical properties of masks, viral spread, & infectivity

in essence, even if a mask stops large droplets, the force of expulsion may nebulize them into aerosols

so, it's possible that aerosol spread of cov is caused/accentuated by masks https://t.co/FiHfMU3NKD

el gato malo
@boriquagato
anyone currently shocked by the fact that the politicians in power recant and reverse the views they held when they were in opposition (and vice versa) has simply not paid any attention to history. 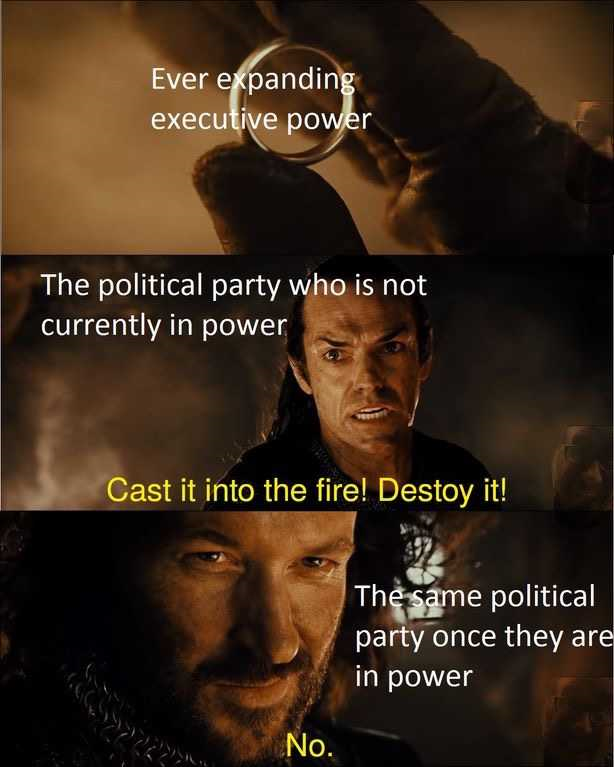 this latest biden refusal to commit to a view on packing SCOTUS until after the election is just this same phenomenon.

if he wins, he's for packing it. if he loses, he'll be against it.

this is because almost none of these people stand on any principles. 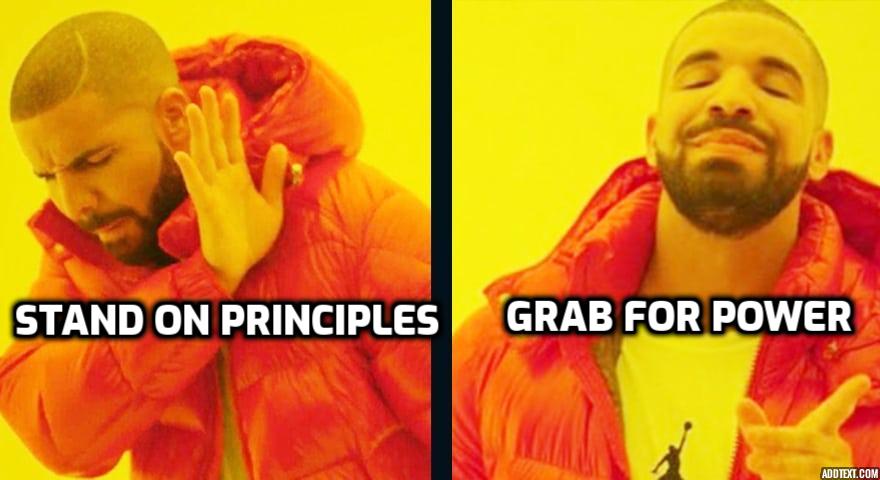 this is why it's so hard to trust any of them.

and why shouldn't they act this way?

it's what we reward. we all accept their lies even when we KNOW they are lies. we elect them anyway.

we accept that all we ever get is the lesser of evils.

will biden pay any price? nope. 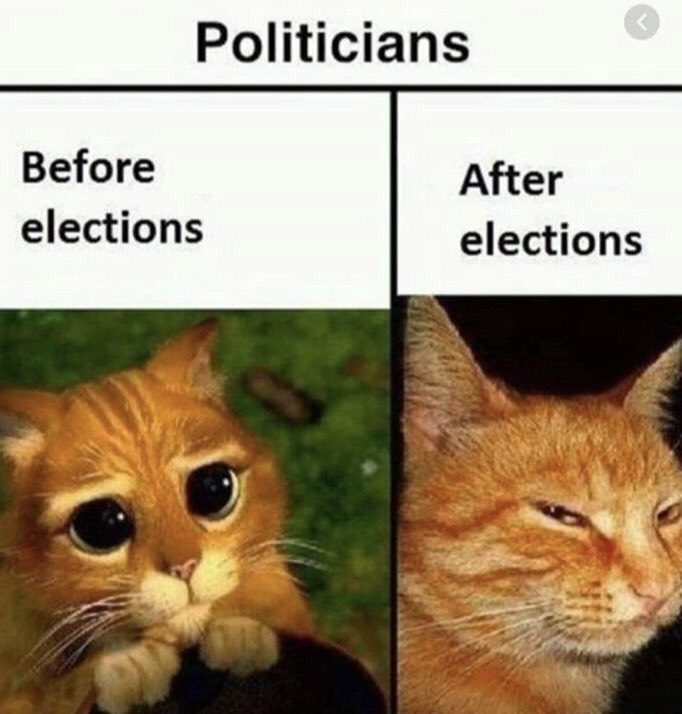 the fault lies not w/ these narcissistic liars & sociopaths, it lies with us

we're the ones electing them & putting up with monstrous & dishonest behavior because "it's not as bad as what the other guy would do."

those are the railroad tracks to tyranny.

it demands a question:

if the outcome of an election is so impactful that it can make or ruin your life or save or lose the republic (as many claim it is) is that not proof positive that the government is FAR too powerful?

do you really want to gamble for such stakes? 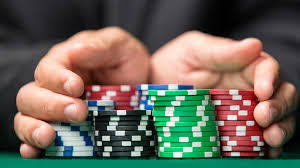 this morning, there was no link to it in a direct google search.

could this be because certain internet felines noticed this and @chiproytx and @tedcruz helped call them out on this?

we may never know. 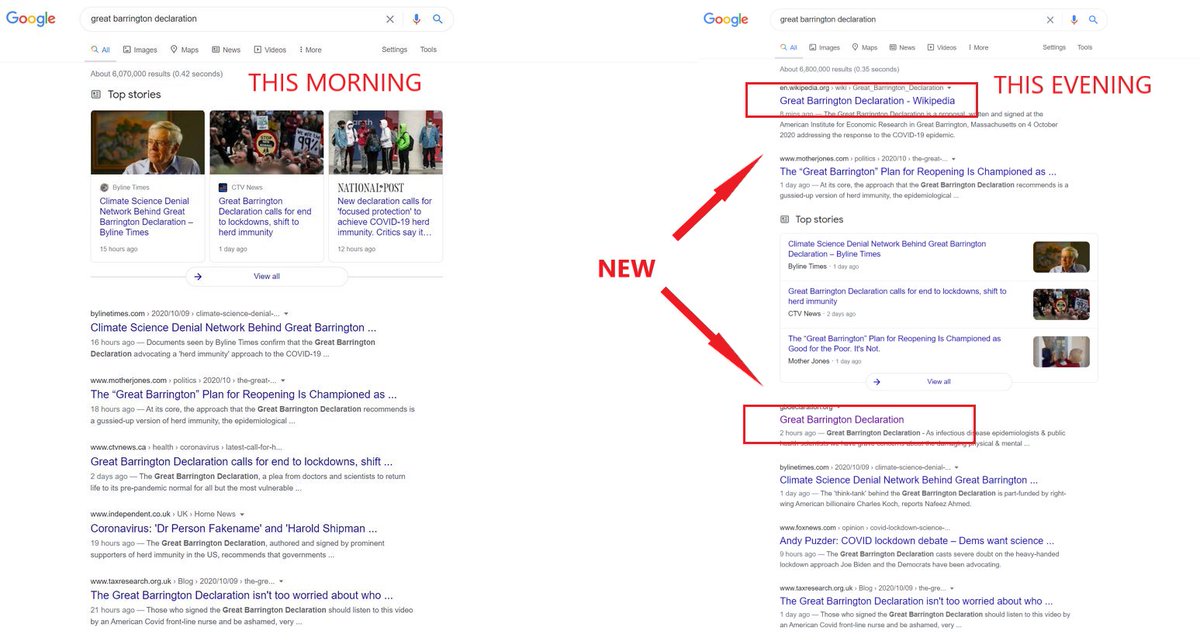 when "mother jones" is your top media result for a science search, well, that says it all, doesn't it?

i mean, why would we trust THESE people instead of a reporter at one of the most partisan rags on earth? oh, wait..

they're censored because the other side cannot rebut them

and that is simply not a thing we can or should tolerate, especially not in a search engine.

so remember this. look for it in the future. demand primary sources.

use other search engines.

bing seems to be seeking to inform, not to inflame and mislead. 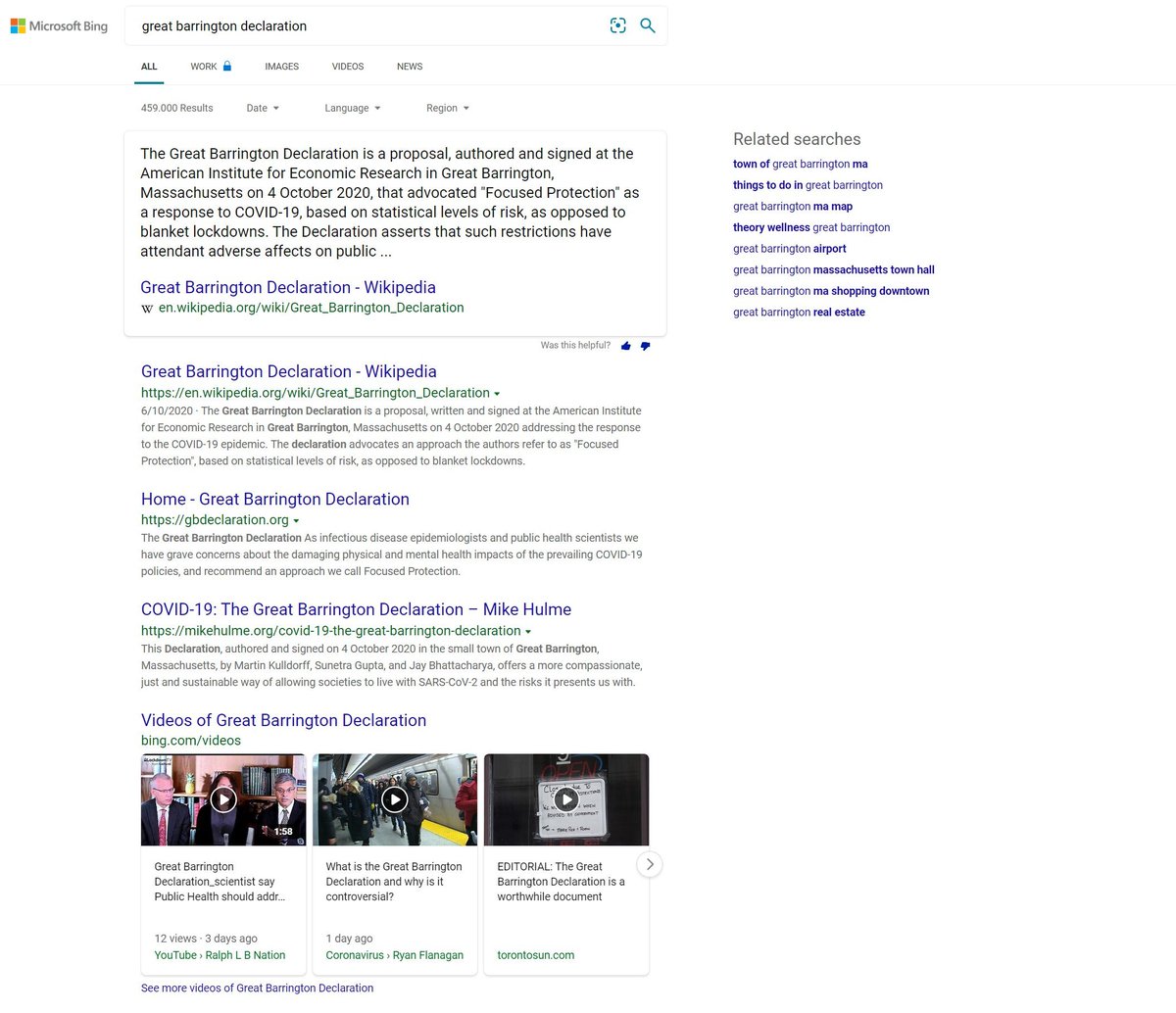 if you missed it, the original thread was here:

(and yes, lots of people duplicated my finding this morning)

i'd be curious to see what they are all seeing

not only have they wiped it from the top results, they have salted it with false claims about "climate denial"

el gato malo
@boriquagato
the US runs its covid testing at 40Ct.

this is 1024X the amplification level of this cutoff for finding live virus that is in any way clinically relevant.

but please, tell me again how demanding more such testing is "science" and not "flooding the data w/ meaningless positives"

A systematic review published 12/3/20 by the Oxford U Ctr for Evidence-Based Med has confirmed that C19 rtPCR testing patient sample cycle thresholds (Cts) >30 (mean from 6-studies) are associated with NEGATIVE viral cultures, i.e., are non-infectious https://t.co/t79dSHnHgn

not only have they wiped it from the top results, they have salted it with false claims about "climate denial"

here's bing (who plays it straight) 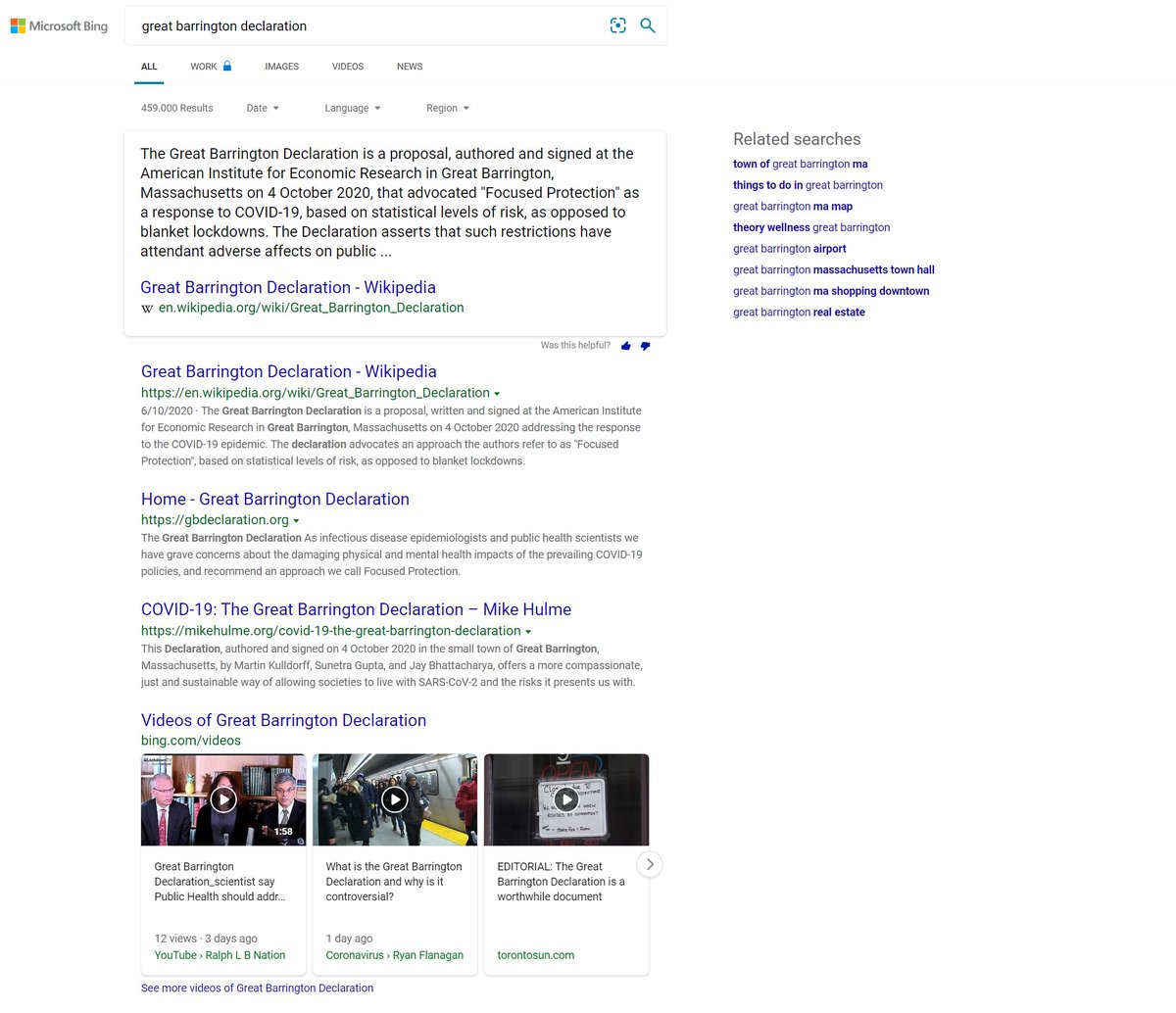 you can see the authors, kulldorf, gupta, bhattacharya's names and know this this was written by medical professors at harvard, stanford, and oxford.

there's no slant, not editorializing, it's primary source info.

now let's have a look at google.

pretty different looking results, huh? not only do they not lead with the declaration itself or its authors, they lead with dishonest hit pieces.

they try to tie it to climate denial and fake science. 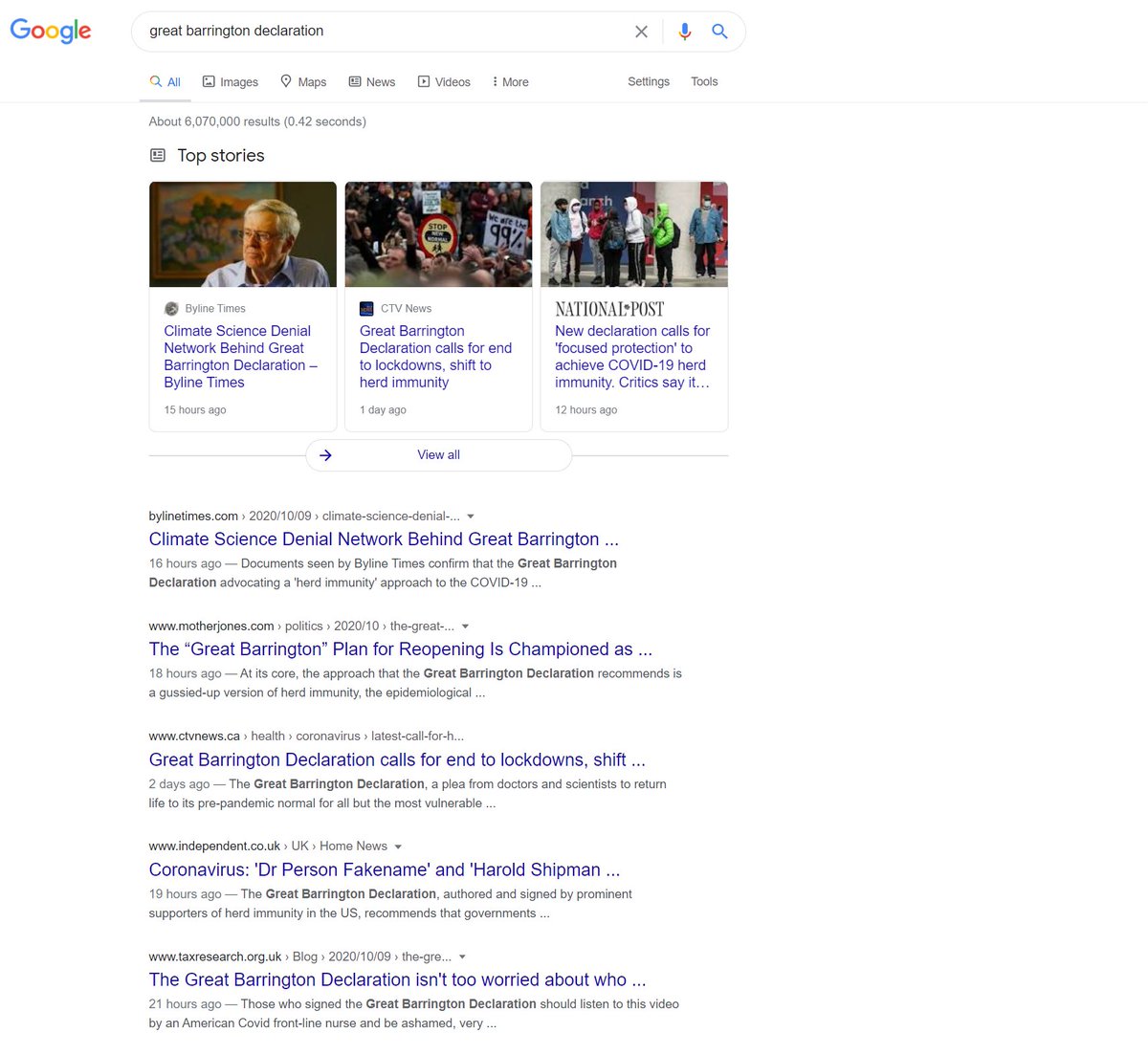 the google results for "great barrington declaration" are simply not search results at all.

it's a propagandistic hit piece ducking the science, ignoring the credentials of the authors, failing to show the declaration, and spinning it as some kind of fringe cabal of "deniers." 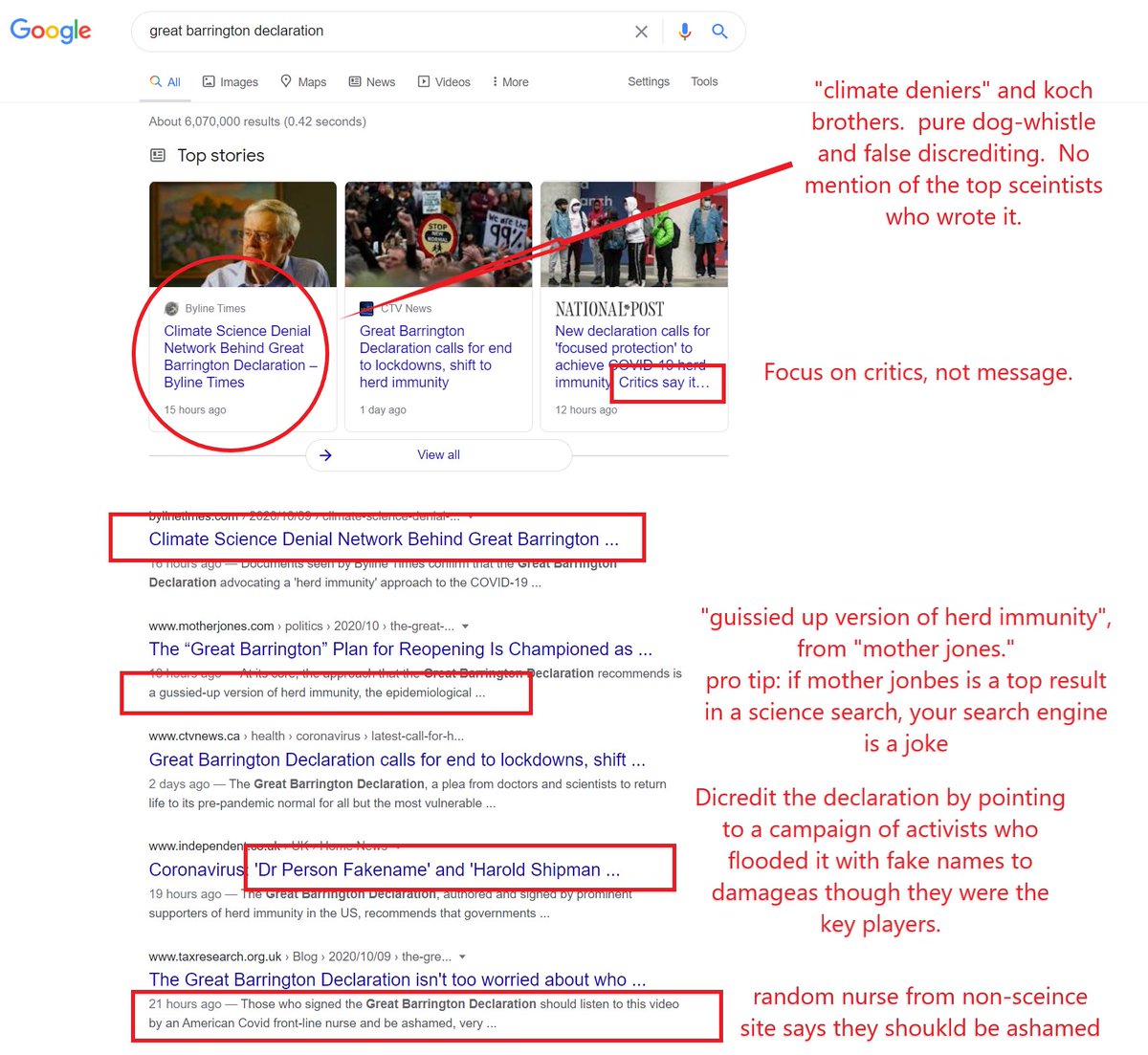 it's staggeringly blatant once you see it, but will anyone?

or will they be fooled by this because it's subtle and you think google is a search engine, not a radicalized editorial column.

and it's now EVERYWHERE.

OMG \U0001f62f
- reddit has censored discussion of The Great Barrington Declaration
- and Google has removed it from their search engine results (can only see articles about it now, as they cannot censor those

"hold my beer and watch this"

though i suppose none of us should be surprised.

"anyone who needs to go protest racism, sexism, the patriarchy, or the police gets vaccine priority"

i hope i am joking.

i fear i may not be.

el gato malo
@boriquagato
did you consider checking the facts before buying into such hysterical claims?

this is LA department of health services hospital census. it's essentially identical to the levels from last year.

the media have had a severe tendency to overstate these issues. https://t.co/ktTPIbKcdQ 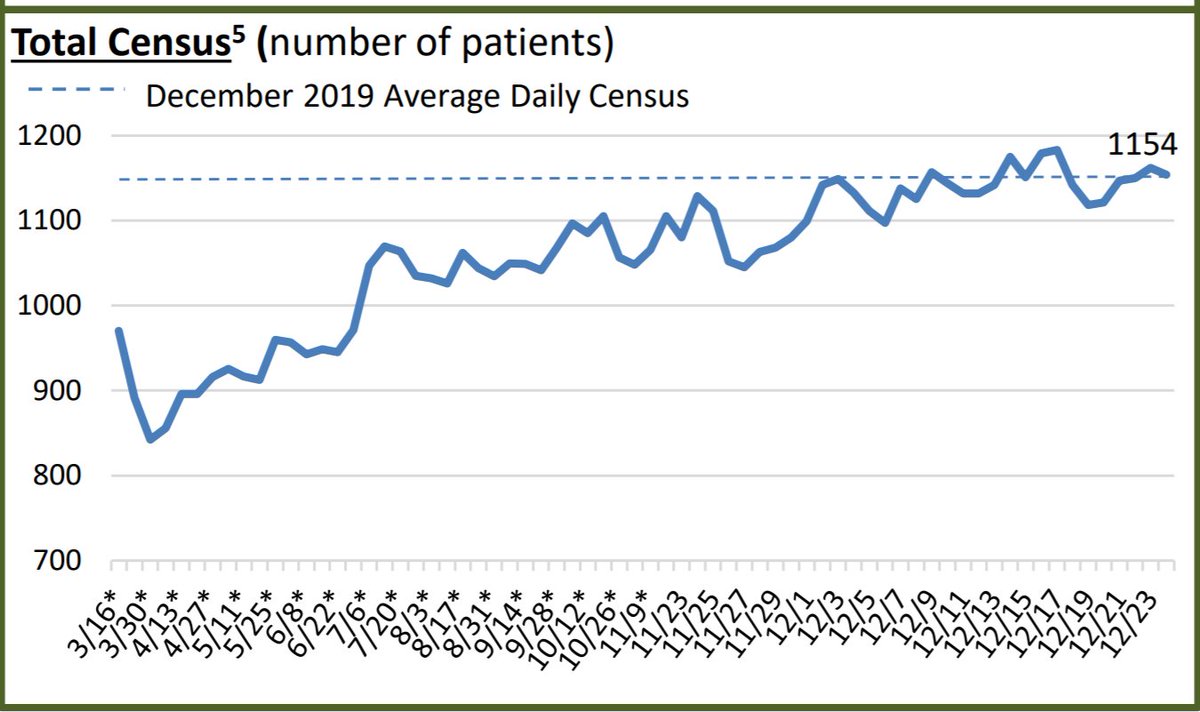 as you can see, visits to emergency departments have been quite stable for 4 months. 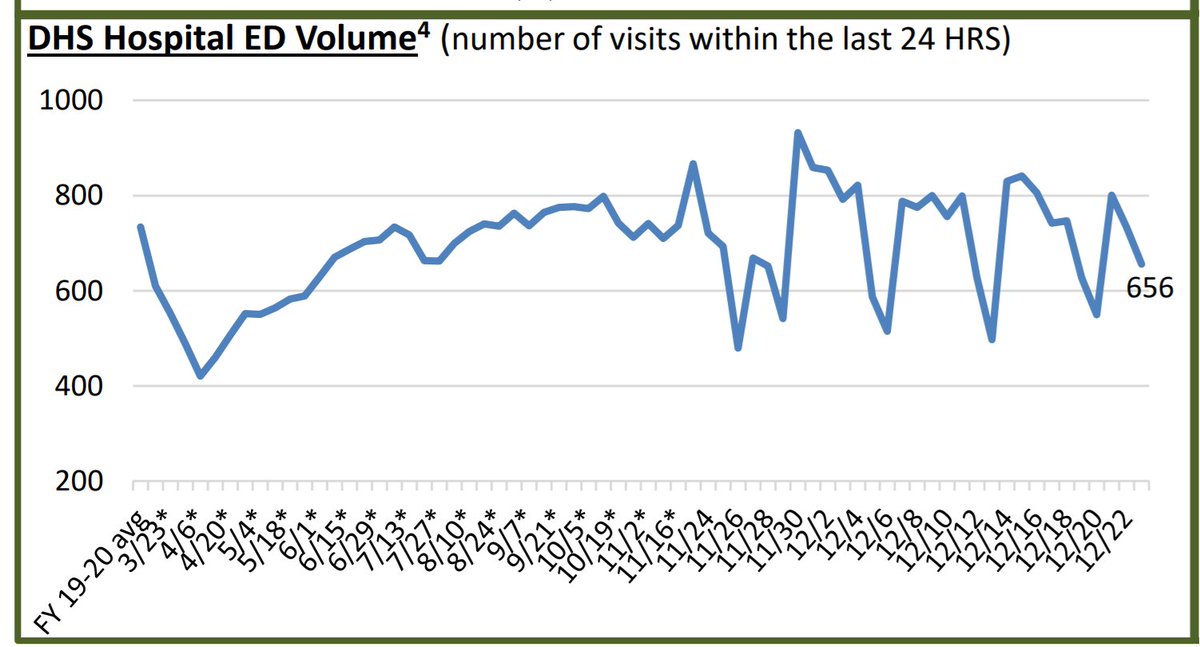 and ICU bed availability has been flat for the whole month of december. 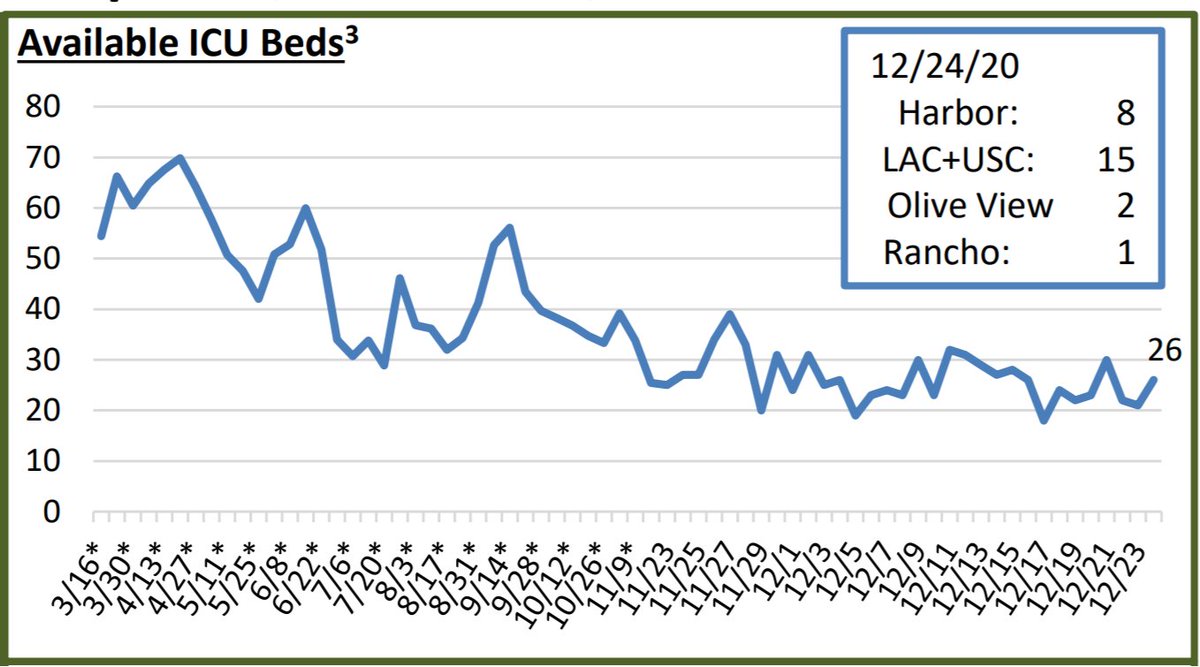 and if you will not take my word for it, just ask the CEO's of the hospitals in texas everyone was so breathless about this summer.

they were not worried. and they were

it's sort of interesting:

this pretty much tells you everything you need to know about the panic patrol and their relationship to facts.https://t.co/4H4ocDFoCs

hospital census in LA seems to be about 3000 patients below where it was in july.

this seems to imply a drop in staffed beds which, contrary to the narrative is not from "exhaustion" but rather from people being laid off or staying home because kids are not in school.